SIOUX CITY – A Des Moines woman who was caught bring meth to a customer in Kossuth county was sent to federal prison for 10 years.

Johnson was sentenced in Sioux City by United States District Court Judge Mark W. Bennett. Johnson was sentenced to 120 months’ imprisonment. A special assessment of $100 was imposed. She must also serve a five-year term of supervised release after the prison term. There is no parole in the federal system. Johnson is being held in the United States Marshal’s custody until she can be transported to a federal prison. 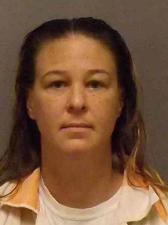