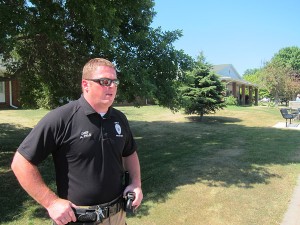 MANLY – The city of Manly in Worth county has hired a new police officer.

Police Chief Aaron Pals updated the city council on Wednesday regarding the hiring of a new police officer. Mayor Kevin Isaacson presented candidate Cameron Curoe to the table with an annual salary of $35,000.00, plus an increase of $1,000.00 after he has completed the academy and pending passing his physical.

The council approved the hiring of Curoe unanimously. Curoe’s hiring fills the vacancy left by Chis Piper who resigned in June. The Manly police department employs the Chief – Pals – and just one other officer.

Curoe lives in Forest City with his wife, Casey, who is in her fourth season as the women’s head soccer coach at Waldorf College.