MASON CITY – Police were called to an apartment complex in MasonCity to investigate a domestic incident Tuesday afternoon and took a man to jail.

Officers with the Mason City police department responded to 1601 Royal Circle at about 1:43 PM after an emergency call about a domestic dispute. Upon arrival, police investigated and determined that 34-year-old John Arthur Matous had committed an assault that involved strangulation and was placed under arrest.

Matous was taken to jail, booked and held on no bond.

Iowa law states that “For a domestic abuse assault committed by knowingly impeding the normal breathing or circulation of the blood of another by applying pressure to the throat or neck of the other person or by obstructing the nose or mouth of the other person, and causing bodily injury, the person commits a class “D” felony.” 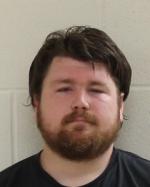