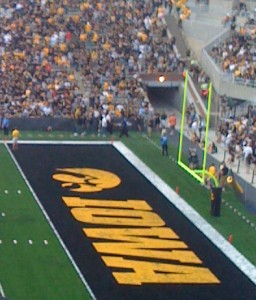 The Hawkeyes improved to 10-0 when playing UNI in a season opener.

The Iowa defense allowed just 25 yards rushing. It is the fewest rushing yards allowed by an Iowa defense since holding Minnesota to 7 yards in 2008.

RB Mark Weisman returned the opening kickoff 50 yards. It was the first kickoff return of his career.

LB Quinton Alston recorded a sack on third-and-13 in the fourth quarter. The sack (-8) was the first of his career. Alston finished the game with a career-high eight tackles, including 2 tackles for loss (-10).

QB Jake Ruddock completed 31-for-41 passes for 250 yards and two touchdowns. The yardage total is Rudock’s highest since the 2013 season opener, when he threw for 256 yards against Northern Illinois. Rudock complete passes to 13 different Hawkeyes.

K Marshall Koehn connected from 40 yards on his first career field goal attempt. He finished the day 1-for-2 (missed from 37). He was perfect on four extra point attempts. The Hawkeyes have converted on 127 consecutive PATs without a miss or block, and have gone 43 consecutive games without a missed or blocked PAT, the second-longest streak of any school in the nation (Illinois) entering today.

Instant replay was not used today.