This news story was published on August 28, 2014.
Advertise on NIT • Subscribe to NIT 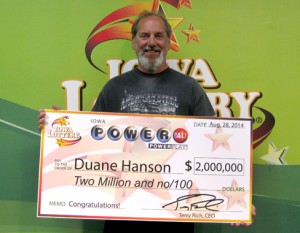 DES MOINES – An Osage man is now a millionaire.

Duane Hanson of Osage, the owner of a lucky Iowa lottery ticket, has claimed a $2 million prize. Hanson’s ticket matched the first five numbers but missed the Powerball to initially win a $1 million prize. But because he had added the Power Play option to his ticket, it multiplied the prize to $2 million.

Hanson ticket was purchased in Osage. It was one of two tickets across the country that won a $2 million prize in Wednesday’s drawing.