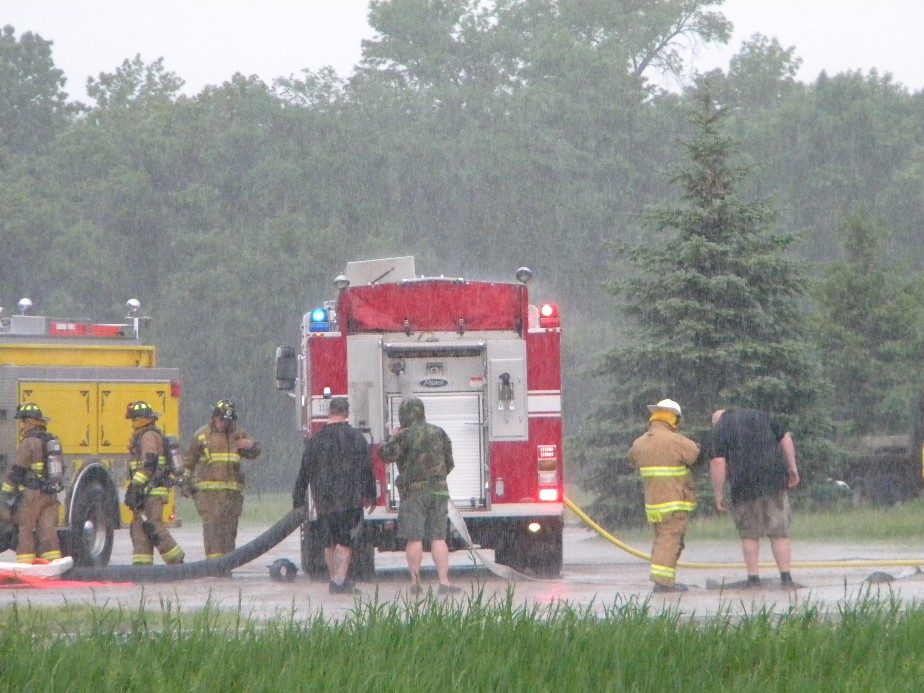 Sunday at around 3:15 PM, the Mason City Fire Department responded to a report of a structure fire at 300 Court and Partridge Avenue, north of town. Flames and smoke poured out of a building at that location. Mason City fire and Manly fire departments were at the scene. Smoke filled the rain soaked sky and it was thought that Highway 65 would have to be closed, but firefighters got it under control and the highway was not closed.

Cerro Gordo county sheriff Kevin Pals said he had no information on the fire, nor any subsequent investigation, but said the MC Fire Department was investigating. Mason City police said they did not respond to the fire.

According to the Mason City Fire Department, emergency responders were called for a possible building on fire. En route, dispatch advised that they were getting multiple calls on this and that everyone was out of the building and it was possible that there was a large amount of “farm chemicals” stored in the building.

Upon arrival, the owners were on scene and advised that there was just a few pallets of old dry weed killer chemicals at the far east end of the building. This building is approximately 120 x 40 feet long and the fire is showing out of the far West end of the building. 2312 crew made entry into the A/B corner of the building. fire was immediately inside of the door, fire knocked down and crew proceeded another 15ft around the corner to the main fire room. Fire extinguished there also. At this point the entry crew exited the building. An overhead door was located at the center of the B side, this was opened to allow for better access and the Blitz monitor was placed there in case it was needed. 2nd entry crew entered the building and finished the extinguishment in the main fire room and balcony area above the room.

State Fire Marshal Shoop was contacted for investigation. Investigation is pointing towards a lightening strike and failure of the electrical panel. SFMO is awaiting a lighting analysis before making a final decision. Still under investigation. About $10,000 in damage was caused.