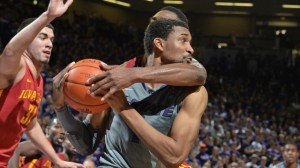 MANHATTAN, KS – MARCH 01: Guard Shane Southwell #1 of the Kansas State Wildcats gets fouled by forward Melvin Ejim #3 of the Iowa State Cyclones during the second half on March 1, 2014 at Bramlage Coliseum in Manhattan, Kansas. (Photo by Peter G. Aiken)

MANHATTAN, Kan. – Kansas State got a season-high 38 points from its reserves to run its home court winning streak to a Bramlage Coliseum-record 15 games with an 80-73 win over No. 15/17 Iowa State before a sold-out crowd on Saturday evening.

The victory also gave K-State (20-9, 10-6 Big 12) 20 for a school-record eighth consecutive season and 10 in conference play for the fifth straight season. The Wildcats have now won 10 of their last 13 meetings against ranked teams on their home court, including five in a row this season.

“Obviously, this a really good team win for us,” said head coach Bruce Weber. “They had two special players tonight in (Melvin) Ejim and (DeAndre) Kane, who are two of the best players in the Big 12. We had major foul trouble in the first half and probably the key to the game was our bench points, 38-2. We had some unconventional lineups in there. They did not go down. They kept battling. One of our goals was to hold them under 70. We did not quite make it, but we had good stops down the stretch.”