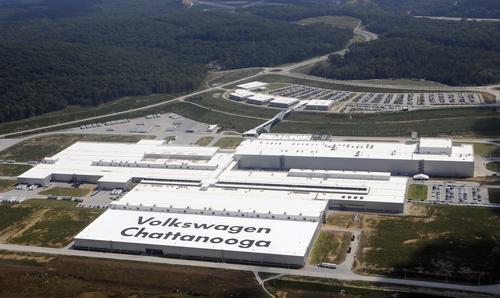 CHATTANOOGA, Tenn. – Several hundred Volkswagen workers in Tennessee said no to becoming a part of the United Auto Workers union late this week.

At the end of voting on Friday, Volkswagen workers voted against joining the union in a vote of 712 to 626. The plant has about 1,550 hourly workers who were eligible to vote.

The decision follows three days of voting during an election supervised by the National Labor Relations Board and comes amid a firestorm of interference and threats from special interest groups.

“While we certainly would have liked a victory for workers here, we deeply respect the Volkswagen Global Group Works Council, Volkswagen management and IG Metall for doing their best to create a free and open atmosphere for workers to exercise their basic human right to form a union,” said UAW President Bob King.

“We commend Volkswagen for its commitment to global human rights, to worker rights and trying to provide an atmosphere of freedom to make a decision,” said UAW Region 8 Director Gary Casteel, who directs the union’s Southern organizing. “Unfortunately, politically motivated third parties threatened the economic future of this facility and the opportunity for workers to create a successful operating model that that would grow jobs in Tennessee.”

“While we’re outraged by politicians and outside special interest groups interfering with the basic legal right of workers to form a union, we’re proud that these workers were brave and stood up to the tremendous pressure from outside,” said UAW Secretary-Treasurer Dennis Williams, who directs the union’s transnational program. “We hope this will start a larger discussion about workers’ right to organize.”

U.S. Senator Bob Corker, R-Tenn., who was mayor of Chattanooga when Volkswagen decided to build there, on Friday released the following statement:

“Needless to say, I am thrilled for the employees at Volkswagen and for our community and its future,” said Corker.As mayor of Chattanooga from 2001-2005, Corker worked with officials and community leaders to develop the 1,200 acre Enterprise South Industrial Park, which is now home to Volkswagen’s North American manufacturing headquarters. Much of the negotiation that led to Volkswagen choosing Chattanooga occurred around the dining room table of Corker’s Chattanooga home.

According to Reuters news, the vote will have wide-reaching implications for the auto industry in the South, where all foreign-owned vehicle assembly plants employ nonunion labor, and for the United Auto Workers union, which could use a victory to reverse a decades-long downward spiral. While voting was under way on Wednesday, Republican U.S. Senator Bob Corker said VW could announce new investment in the plant if the UAW lost the secret ballot.

Reuters further reported that President Obama interjected himself into the fray and said everyone was in favor of the UAW representing Volkswagen except for local politicians who “are more concerned about German shareholders than American workers,” according to a Democratic aide who attended the meeting with Democratic lawmakers in the House of Representatives.