This news story was published on December 31, 2013.
Advertise on NIT • Subscribe to NIT 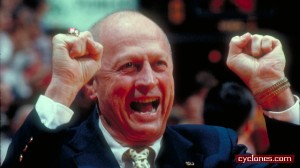 AMES, Iowa – Johnny Orr, the man credited with resurrecting a once-dormant Iowa State men’s basketball program and energizing an entire fan base, passed away today. He was 86 years old.

Orr was one of the nation’s most successful basketball coaches during his 29-year head coaching career (1964-66, 1969-94). He compiled a 466-346 career coaching mark and led 10 teams to NCAA Championship berths while at Massachusetts, Michigan and Iowa State.

“He was my hero,” said Iowa State head basketball coach Fred Hoiberg, who played three years for Orr. “As a kid, just to see him walk out of that tunnel was what you waited for on game nights. Just to see his enthusiasm and passion. He was a father figure to so many of us. He impacted so many lives and made all of us better people. Not only was he a great basketball coach, he was even a better person.”

Orr inherited a downtrodden Iowa State program that had produced losing seasons in five of the last six years prior to his arrival in 1980-81. He spent 14 years roaming the sidelines at Hilton Coliseum, making steady improvement and leading the Cyclones to a school-record six NCAA Championship appearances and five 20-win seasons. Orr retired in 1994 as Iowa State’s all-time winningest coach with a 218-200 record.

Orr was a winner at Iowa State, but his legacy in Ames was achieved by more than wins and losses. The ever-popular Orr was the perfect coach at the perfect time for Iowa State. His exciting, up-tempo style of play – combined with his infectious personality – created a tidal wave of excitement throughout the state of Iowa.

An Iowa State game in Hilton Coliseum became the hottest ticket in the state, as Orr’s teams steamrolled over their opponents for a 76.7 percent winning percentage at home.

Hilton Coliseum erupted when Orr made his entrance fist-pumping to the “Tonight Show” theme. It usually spelled doom to the opposing team, even if the Cyclones weren’t the favorites. Orr’s Cyclones defeated top-25 opponents 20 times at home and he owns 12 of Iowa State’s 29 all-time victories vs. top-10 opponents.

Iowa State’s home-court dominance in sold-out Hilton Coliseum under Orr created a frenzied atmosphere that was second to none. The local and national media picked up on it, and soon the term “Hilton Magic” was created when Des Moines Register writer Buck Turnbull used it in one of his stories after another huge Cyclone victory at home. The moniker still is prevalent today.

The 1985-86 Cyclone squad was possibly his best. Led by future NBA all-star Jeff Hornacek and Iowa State’s all-time leading scorer Jeff Grayer, the Cyclones finished with a then-school-record 22 wins and placed second in the Big Eight Conference at 9-5. After securing its second-straight NCAA berth, the Cyclones advanced to the Sweet Sixteen with a victory over No. 2 seed Michigan, Orr’s former school.

The win over the fifth-ranked Wolverines was, “the greatest of my career” Orr beamed afterwards and cemented his already enormous popularity among the Iowa State faithful.

Orr’s Cyclone teams would later make NCAA appearances in 1988, 1989, 1992 and 1993 and annually ranked in the top 25 nationally in scoring. Iowa State averaged over 80 points per season six times in the Orr era, including a school-record 90.2 ppg in 1987-88, which ranked ninth nationally. The top four scorers in Iowa State history were coached by Orr (Grayer, Barry Stevens, Hoiberg, Victor Alexander).

Orr coached six Cyclones who earned first-team all-Big Eight honors 10 times. He mentored a total of six Cyclones who went on to a career in the NBA (Grayer, Hornacek, Stevens, Alexander, Hoiberg, Loren Meyer). Grayer was an All-American and is the only Cyclone men’s hoopster to compete on a United States Olympic Basketball team, earning a Bronze Medal at the 1988 Olympics.

A native of Taylorville, Ill., Orr graduated from Beloit (Wisconsin) College in 1949, where he was a two-time All-American in basketball. He coached at the high school level throughout the 1950s, including a stop at Dubuque (Iowa) Senior High School from 1951-59.

His first move into collegiate coaching was as an assistant at Wisconsin for four seasons. Orr became a collegiate head coach in 1963, when he was handed the reins at Massachusetts for three seasons.

After UMass, Orr assisted Dave Strack at Michigan for one season before taking over head coaching duties at Michigan prior to the 1968-69 season.

Orr led the Wolverines to four NCAA Championship appearances in 12 seasons, amassing a school-record 209 victories. He is one of the few coaches to be the all-time leader in career wins at two high-major schools.

Orr’s Michigan squads finished second in the Big Ten Conference three times and captured the 1977 Big Ten title. In 1976, Michigan advanced to the NCAA Championship title game, falling to Indiana in the national final. He was named National Association of Basketball Coaches (NABC) National Coach of the Year in 1976 and was Big Ten Coach of the Year twice (1974, 1977).

Throughout his 29-year head coaching career, Orr tutored 18 players who were drafted by the NBA.

Orr remained an active supporter of Iowa State after his retirement in 1994. His immense popularity among Cyclone fans never waned, either. Orr always was the life of the party at Cyclone outings, pep rallies and reunions. He had a special ability to make people laugh.

Orr was inducted into the Iowa State Letterwinners Club Hall of Fame in 2001. In 2011, the Iowa State Athletics Department opened a large sports bar-themed gathering area in the east concourse of Hilton Coliseum, naming it “Johnny’s” as a tribute to the coaching legend.

Outside the entrance of “Johnny’s”, a larger-than-life statue of Orr with his trademark fist-pump is permanently on display, along with memorabilia of his coaching tenure at Iowa State. His legacy is preserved for future generations of Cyclone fans.

Orr is survived by his wife, Romie, and three daughters; Jennifer, Leslie and Rebecca. He was preceded in death by his daughter, Robin, who passed away in 2010. The Orrs have five grandchildren and two great-grandchildren.