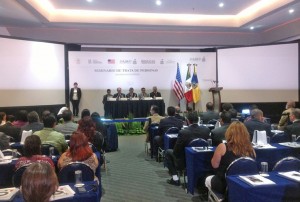 More than 100 representatives of the PGR and other government entities in the state of Jalisco learned how to identify potential human traffickers and victims of human trafficking and related crimes. As a result of the training, the host agencies also hoped to increase collaboration between the United States in Mexico to combat human trafficking.

In the opening ceremony, Acting Consul General of the United States in Guadalajara Mark Seibel and the Attorney General of Jalisco Luis Carlos Najera Gutierrez de Velasco pledged their commitment to combat these crimes and develop a joint action plan to fight this evil practice. State Attorney General Najera Gutierrez de Velasco highlighted the efforts of the U.S. Consulate to support the state of Jalisco in training their personnel and other government bodies.

“No country is untouched by human trafficking, and all governments have a responsibility to prevent it, to protect those who have been abused, and to punish their abusers,” said U.S. Ambassador Earl Anthony Wayne. “That’s why the United States focuses our efforts on confronting this crime within our borders and by partnering with governments around the world as they work to eradicate modern slavery.”

“Human trafficking is a problem that often centers on migrants who attempt to cross the United States/Mexico border in search of the American dream,” said HSI Attaché Mexico City Timothy Tubbs. “HSI is hoping that this training to Mexican law enforcement agencies will further collaboration in investigations and rooting out the heinous criminals associated with human trafficking and rescuing and protecting the victims.”

Human trafficking is a tragic, serious cross-border crime, and HSI is the lead U.S. federal government agency to investigate and dismantle human trafficking organizations. These victims are trafficked into the commercial sex trade and into forced-labor situations throughout the world. Many of these victims are lured from their homes with false promises of well-paying jobs, but instead, are forced or coerced into prostitution, domestic servitude, farm or factory labor or other types of forced labor.