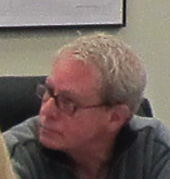 Brian McNamara was “chewed out” today at City Hall.

MASON CITY – Today at a budget hearing at City Hall, Human Rights Commissioner Brian McNamara was “chewed out” by City Finance Director Kevin Jacobson for sending an email that questioned Jacobson’s professionalism and attention to detail in doing his job.

According to multiple sources in attendance, Jacobson “chewed (McNamara) up and down about that nasty email he sent out demanding that Kevin get to the table and explain the budget stuff to the commission. (It was) a good one.”

Jacobson questioned whether McNamara should remain on the Commission if he is allowed to be rude to city staff.

According to sources, McNamara “just sat there with his mouth open in amazement professing that he did not intend to insult” and said “that’s not what I meant.”  McNamara also told Jacobson that Jacobson took McNamara’s email “out of context.”

McNamara, along with Commissioner Steve Palmer (both appointed to the Human Rights Commission by Mayor Eric Bookmeyer) has been accused of  “slowing down the work of the commission” and has led the way in questioning expenditures and duties of the agency.  The agency is in transition at this time as funding has been drastically cut.

Sources have also brought to NIT’s attention that McNamara has lead a campaign behind the scenes to halt communication between the Human Rights Department / Commission and NorthIowaToday.com; some have called this a “gag order.” McNamara refused to comment when questioned by NIT Publisher Matt Marquardt about this gag order initiative.  Sources indicated that at least one other commissioner supported McNamara’s gag order and it was discussed over a lunch at Lorado’s.  Information continues to flow freely to NIT despite these efforts.