This news story was published on May 17, 2013.
Advertise on NIT • Subscribe to NIT 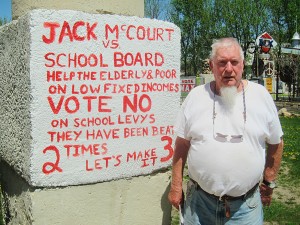 Jack McCourt believes that due to significant drop in school enrollment in Mason City, no levy is needed

After spearheading a petition drive last month that garnered about 1,100 signatures that forced the Mason City School Board to hold a vote on a proposed Instructional Support Levy (ISL), McCourt is now focused on the vote itself.

“They want more more more,” McCourt said Thursday of the school district, referring to funding.  McCourt has already lead two campaigns against new taxes from the school district.  The ISL was approved by the school board and would have been final.  Only due to McCourt’s petition drive will the voters make the ultimate decision.

“The poor and the elderly can’t shoulder the burden,” McCourt said.  “And that’s who this falls on.  And once this levy is in place, it’s not for five years.  It’s forever.”

School district officials claim that Mason City is the only size 4A school with no ISL.  The district made a public display this month of cutting teacher contracts and threatened to cut coaches as well, which brought out a large crowd against that move.  State funding cuts have diminished dollars to all school districts in Iowa, further necessitating cuts to personnel until the state decides how much funding it will provide.

McCourt also claims that Mason City once had 8,000 students in its school district.  Now the number is about 3,700.

The school district has not definitively set a date for the ISL vote; the school board regular election, which has four seats up for grabs, will be held September 10th.  The vote on the ISL could be on September 10th or set on a different date.