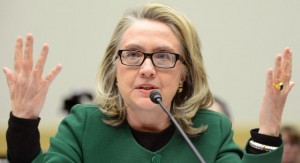 TEANECK, N.J., April 30 (UPI) — Former U.S. Secretary of State Hillary Clinton leads among Democrats but there is no Republican front-runner for the 2016 presidential nomination, a poll found.

Krista Jenkins, professor of political science and director of PublicMind, said the poll of 863 voters — conducted by telephone April 22-28 — shows a potential Clinton candidacy is “clearly being met with enthusiasm by Democratic voters.”

“Republican uncertainty mirrors the identity crisis the party is facing as it redefines its message in the aftermath of the 2012 presidential loss,” Jenkins said.

Support for Clinton was roughly the same regardless of where Democrats surveyed said they got their information.

The poll has an overall margin of error of 3.4 percentage points.