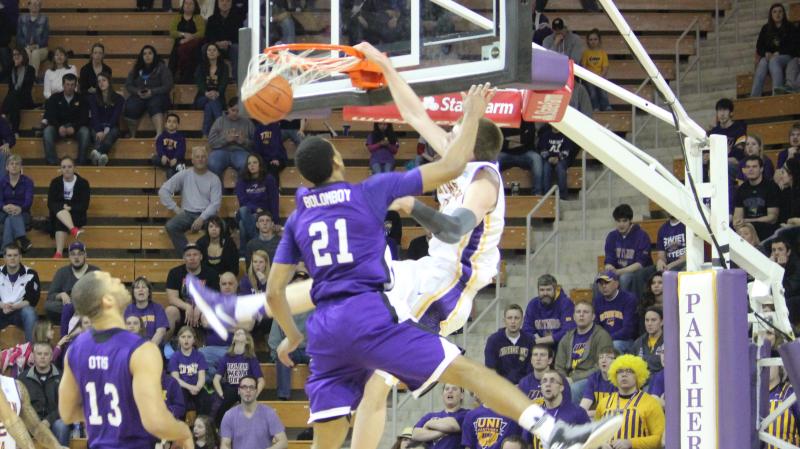 CEDAR FALLS, Iowa – The Weber State University Wildcats advanced to the championship game of the 2013 CollegeInsider.com Tournament (CIT) with a 59-56 win over the University of Northern Iowa men’s basketball team on Saturday in the McLeod Center.

WSU’s Scott Bamforth buried four first-half 3-pointers and knocked in his last one with 3.5 seconds left to give the Wildcats a 38-31 lead at the break.

The Panthers whittled the Wildcat lead away in the second half and eventually took a lead of their own at 44-43 on a bucket from Seth Tuttle. The Wildcats took the lead back at 45-44 on a basket from Frank Otis with 12:35 left.

The Wildcats pushed the lead back to five at 49-44 on a three-pointer from Davion Berry with 10:05 left in the game.

Tuttle had a chance to tie the game at the free throw line with 2:10 left but made only 1-of-2. WSU’s Jordan Richardson knocked down two free throws with 17.8 left to give the Wildcats a 59-56 lead.

WSU fouled UNI on the ensuing possession but the Panthers’ Jake Koch missed both free throws with 4.5 seconds left. WSU’s Berry missed the front end of a one-and-one with 3.6 left and UNI called a timeout.

UNI advanced the ball along the sideline and had 1.5 left for a final shot. Sonnen inbounded the ball to Koch at the 3-point line but the shot was short and the Wildcats took the game.

WSU was led in scoring by Berry with 15 points. Bamforth added 14 — all in the first half.

UNI was led in scoring by Tuttle with 16 points. Tuttle notched a double-double with 10 rebounds as well.

NOTES: Weber State will host East Carolina on Tuesday in Ogden, Utah, at 7 p.m. (CT) in the 2013 CIT championship game … UNI’s Marc Sonnen made one 3-pointer to move into a tie for No. 2 all-time at UNI with Johnny Moran (201 3-pointers made) … Sonnen made at least one 3-pointer in 23 straight games to close his career … Sonnen’s 96 3-pointers made this season ranks him in a tie for the sixth-most ever in a single-season in Missouri Valley Conference history … Sonnen finishes his Panther career having played in the most games (139) in school history … Jake Koch ranks No. 2 on the UNI games played list (138) … Koch ranks No. 10 all-time in games started at UNI (103) … the 36 games played was the most ever in a single season for the Panthers … UNI’s 21 wins ties for the sixth-most in a single-season in school history.