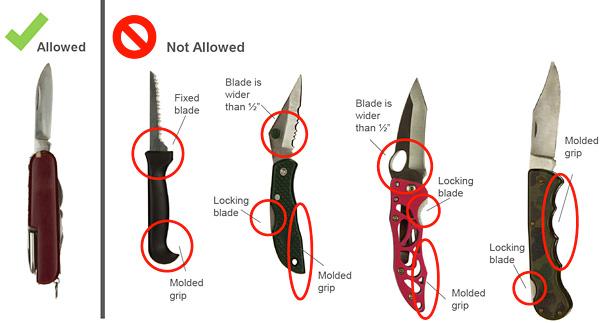 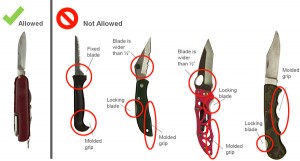 The Transportation Security Administration announced the change this week — set to take effect April 25 — allowing passengers to carry certain small knives onboard. The TSA said the change was intended to align U.S. rules “more closely with International Civil Aviation Organization standards” and reduce the amount of time required for passengers to go through screening.

Passengers will be permitted to carry “knives that do not lock, and have blades that are 2.36 inches or 6 centimeters or less in length and are less than 1/2 inch in width” — as well as “novelty-sized and toy bats, billiard cues, ski poles, hockey sticks, lacrosse sticks and two golf clubs” as part of their carry-on baggage.

“These items have been banned for more than 11 years and will add little value to the customer security process flow in relation to the additional risk for our cabin staff and customers,” Delta’s Chief Executive Officer Richard Anderson said in a letter to the TSA, CNN reported Saturday.

“How big is this knife? Is it long enough? Is it wide enough? Does it lock? Does it not lock? That is going to create confusion at the checkpoint, We’re all better off and were all safer without weapons on board the aircraft,” Shook said.