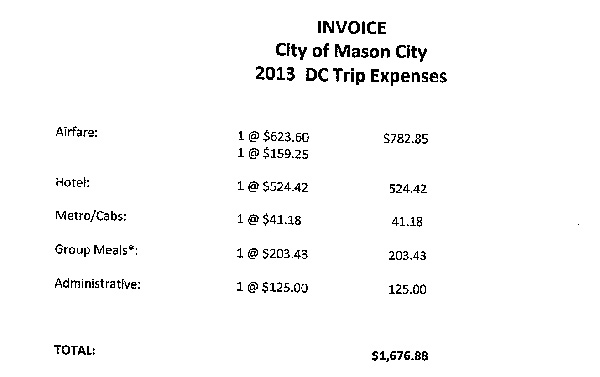 Bookmeyer went to Washington last year, too, and the cost was comparable.  This year, City Administrator Brent Trout did not make the trip, as he did last year.

The Chamber of Commerce pays for the trip and then invoices the City of Mason City (and Cerro Gordo County and the City of Clear Lake) for the expenses for each representative.

Supposedly, the “vital” trip is made so that “connections” in D.C. can be made.  All members of Congress that Bookmeyer and the Chamber visited are regularly in Iowa and many times in North Iowa in their local offices or holding town hall meetings.

Some have called the annual trip a wasteful, unnecessary venture.  One former council member has said that the Chamber of Commerce is “using the clout of local elected officials to gain access to higher ranking politicians in Washington” to promote its right-wing agenda.

According to a Chamber of Commerce invoice sent to the City of Mason City to cover Bookmeyer’s fees for the trip, one meal for Bookmeyer cost over $200.00.

Mason City and airport total cost: $17,238.33 (Not including wages for Brent Trout and Pam Osgood)