This news story was published on March 6, 2013.
Advertise on NIT • Subscribe to NIT 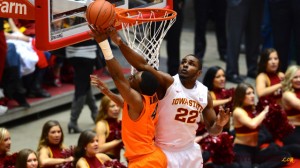 The Cyclone seniors came up big late, tallying 10 points in a 10-2 ISU run to increase a two-point lead to 10 points with 2:15 remaining in the game.

Clyburn and the seniors had help from Melvin Ejim and Georges Niang. Ejim tallied his 13th double-double with 13 points and 12 boards. Niang chipped in with 18 points.

After falling behind 6-0, the Cyclones bounced back with 10-straight points to move ahead 10-6 behind a pair of treys from Chris Babb and Niang.

The Cyclone lead reached 15 points at 30-15 after McGee hit a jumper from the corner. The Cowboys chipped the lead down to 10 points (39-29) at the break.

ISU was 3-of-11 from 3-point range in the opening period, but the Cowboys missed all of their nine attempts from downtown.

OSU cut the ISU lead to six points on a Marcus Smart trey, but ISU then answered with a 5-0 run to move back up, 66-55 after a Chris Babb dunk. Smart led the way for Oklahoma State with 24 points on 8-22 shooting.

Moments later, Kamari Murphy scored on a tip-in. OSU then got a steal and a 3-pointer from Phil Forte to make it 66-60 ISU with 8:11 remaining in the game.

ISU held on by making its free-throws late.

The Cyclones made seven 3-pointers in the game to give them 294 on the season, breaking the single-season school record.

Iowa State travels to West Virginia Saturday to face the Mountaineers at 12:45 CT. The game will be broadcast on the Big 12 Network.