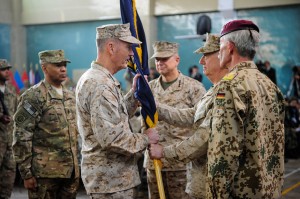 “Today is not about change, it’s about continuity,” said Gen. Dunford, addressing the audience on his vision for Afghanistan and the coalition. “I’ll endeavor to continue the momentum of the campaign and support the people of Afghanistan as they seize the opportunity for a brighter future.”

Gen. Dunford takes over from his fellow Marine and friend of 35 years. Gen. Allen’s 19 months at the helm, beginning in July 2011, make him the longest-serving ISAF commander in the 11-year-old campaign.

Under his leadership, the Afghan National Security Forces, what Gen. Allen has called the “defeat mechanism of the insurgency,” reached their target strength of 352,000 and are now leading the vast majority of operations across the country.

Gen. Allen also played a critical role in stabilizing relations with neighboring Pakistan after a series of crises in 2011 had threatened to fracture the partnership.

Among other distinguished highlights of his career, Gen. Dunford served as the Marine Officer Instructor, College of the Holy Cross; as a member of the Commandant’s Staff Group; and as the senior aide to the Commandant of the Marine Corps. Joint assignments include service as the Executive Assistant to the Vice Chairman, Joint Chiefs of Staff; Chief, Global and Multilateral Affairs Division; and Vice Director for Operations.