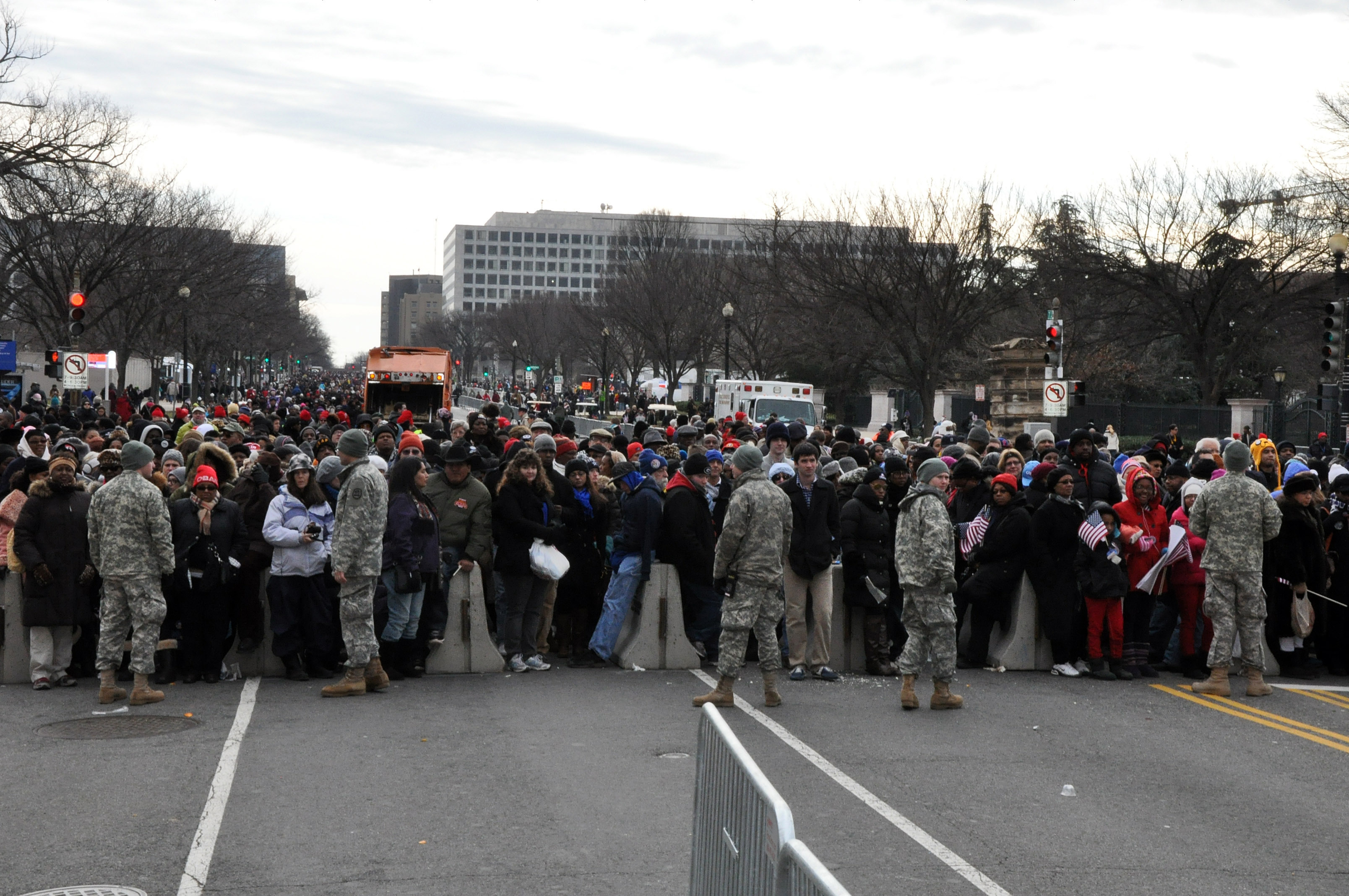 DES MOINES, Iowa – For the second consecutive presidential inauguration, Iowa National Guard soldiers and airmen represented the state of Iowa and helped insure the safety of more than 800,000 attendees at the historic event.

This year, 120 soldiers from Mason City and Iowa City’s 1133rd Transportation Company, airmen from the 185th Air Refueling Wing, Sioux City, and other assorted personnel were activated to assist federal, state and local agencies with support missions for the 57th Presidential Inauguration in Washington.

The Iowans were part of Joint Task Force National Capital Region, a joint service organization charged with coordinating all military ceremonial participation and support for the 57th Presidential Inauguration.

Approximately 6,000 National Guard soldiers and airmen from 25 states and territories supplemented security, communications, medical evacuation and other support during the presidential inauguration period.

After completing medical screenings, in-processing, and readiness briefings at Camp Dodge in Johnston, Iowa, 1133rd Transportation Company soldiers boarded the buses that would transport them to Washington. Nearly 20 hours and more than 1,100 miles later, they arrived at our nation’s capital.

“Our mission was to go out to Washington, D.C., and support the 57th Presidential Inauguration in support of the Secret Service mission,” said Capt. Rob Stangel, of Osage, Iowa, the 1133rd Transportation Company commander. “With the guidance we had been given, we knew we needed to remain flexible because we didn’t get a lot of specific details, but I reckon in an operation like that, they don’t look to give out a lot of details. From what we saw during our recon with the Secret Service personnel the day before, it was pretty close to what we were anticipating.”

By 3 a.m. the first teams had arrived at their checkpoints more than three hours before they were scheduled to open. The soldiers attentively listened to their final assignments before fanning out to begin crowd management operations.

“We didn’t quite know what we could expect from the crowds,” Stangel said. “You prepare for the worst and hope the best happens. And, I think the best did happen. You know our soldiers did a good job out there talking to the crowd and getting them to respond when they needed. I’m really proud of the work they did.”

After serving only two weekend drills with his unit, Pfc. John Elliott of Spencer, Iowa, was ecstatic to have been selected for the inauguration.

“I really didn’t know what to expect, but it’s been an awesome experience. I’ve been able to talk to a bunch of people while assisting them and giving them the okay to move forward into their lines. It’s been a great experience and I’d love to do it again,” Elliott said. “This is one of the reasons why I joined the National Guard, because I would be able to go out and be a part of important things like this.”

For Havelock, Iowa, native Spc. Joshua Bonstead, it was a very unique experience.

“Our mission was crowd control at one of the entry points along the parade route,” said Bonstead. “I worked up at the front of the gates before the people got in line. There were a bunch of people there early, so we got to interact with them, as well as assist people asking questions.

“We also worked with different groups of law enforcement agencies and other groups and they helped us make sure everybody stayed calm and there were no incidents during this ceremony. It was just a great experience,” he said.

“I was really impressed with my soldiers and how they conducted themselves,” said 2nd Lt. Tyler Brockel, of Volga, S.D. “They were very helpful in not just getting the public through the gates, but also helping them out with directions and giving them general information about what was going on in our area of operations.”

As the last vestiges of daylight swept across the district skyline, the soldiers were relieved of their checkpoint duties. Their mission completed, they would once again make their journey back to Iowa, within little more than 12 hours.

According to Master Sgt. Richard Slack of Ankeny, Iowa, his 1133rd soldiers did an outstanding job, as he expected.

“Our people were just outstanding,” said Slack. “These were the best of the unit. So we knew when we went out there, we would be able to perform the task well.

“Our people were very motivated and very excited to be a part of this inauguration. As I tried to express to them, this was history that they were a part of, something they can look back on and talk to their families and tell them, ‘I was involved in the presidential inauguration in 2013,’” he said.

“You know we had a meaningful mission, and I think the soldiers were really proud of the work they did,” Stangel said. “I heard plenty of positive things about the mission itself. There was very little complaining that I heard about anything. The conditions were a little bit warmer than what we expected here, so I think the soldiers enjoyed that.

“Ultimately, you know, this was a really great mission and one we’d be honored and proud of doing again,” he said.

American military members have participated in every presidential inauguration since April 30, 1789, when members of the U.S. Army, National Guard and Revolutionary War veterans escorted George Washington to his first inauguration ceremony at Federal Hall in New York City.