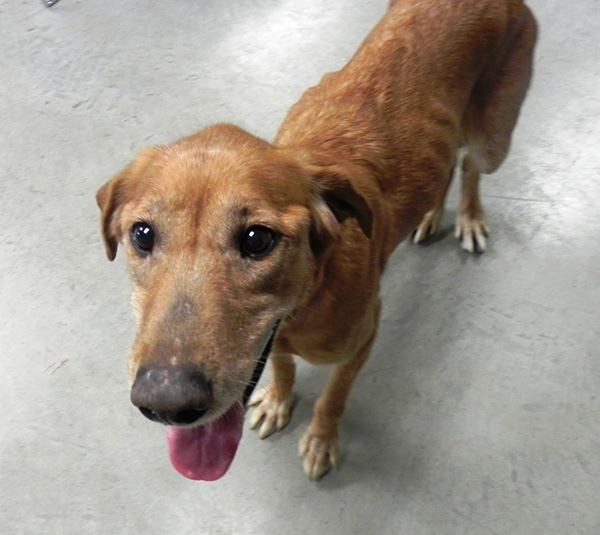 MASON CITY – The Humane Society of North Iowa recently received a phone call from a distressed landlord in Forest City.  An evicted tenant had moved out leaving behind eight dogs, all of whom were emaciated, malnourished, and filthy.  Loving homes were found for all, except for an elderly Golden Retriever, who was later named Goldie.

Goldie had been imprisoned in an outdoor kennel for nearly three weeks.  She had no food and only a limited water supply.  In an attempt to avoid inevitable starvation, Goldie consumed half her tail leaving the bone painfully exposed. Despite all efforts of the landlord, Goldie was clearly in agony; euthanasia was becoming a sad last resort.

On the very day the landlord was preparing to take Goldie to the Veterinarian to end her misery, he made one final attempt to find an alternate ending to Goldie’s tragic story. This time, he called the Humane Society of North Iowa.  Fate intervened.  The shelter had space and resources available to help the dog in need.  The landlord was told to bring Goldie over to the shelter in Mason City right away.

Goldie showed up to the Humane Society of North Iowa skinny, excited, bloodied half-tail wagging, and seemingly anxious to make new friends.  At only 46 lbs, she was a staggering 20 lbs underweight.   The Humane Society of North Iowa immediately scheduled surgery to have her mutilated tail amputated and she was put on a high-protein diet.  Now, just two weeks after her arrival, she had successfully gained 6 lbs, her surgery is complete, her tail is healing nicely and she is ready to put the past behind her.

“Goldie’s story of survival shows us just how resilient this beautiful girl is,” said Sybil Soukup, Executive Director of the Humane Society.  “She endured three dismal weeks of neglect and abandonment confirming that pets are not disposable or something you leave behind when your life moves on.”

Once Goldie makes a full recovery the Humane Society of North Iowa hopes that she will be adopted and given a second chance at the life she truly deserves.  Goldie is a seven year old female Golden Retriever with a survivalist instinct, a forgiving spirit and a heart of pure gold.