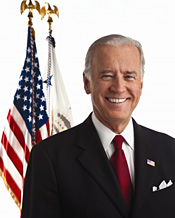 Biden went to the front of the line because Supreme Court Justice Sonia Sotomayor was going out of town before the noon ceremony for Obama.

The high court wouldn’t say where Sotomayor would be, but the Los Angeles Times said she had an appearance at a New York City bookstore scheduled Sunday afternoon.