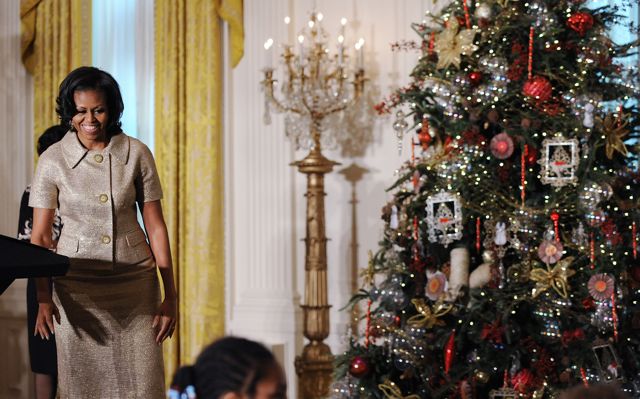 WASHINGTON — “Joy to All” is the theme of the Obamas’ fourth Christmas in the White House, which threw open its festive, fir-draped doors Wednesday to the first guests of the season, U.S. troops and their children.

Fifty-four live Christmas trees lend color and sparkle to the Executive Mansion. The largest of the trees is an 18-foot, 6-inch Fraser fir from North Carolina that is festooned with ornaments crafted by children from U.S. military bases around the world.

Amid the greenery and garlands, another highlight: a gingerbread house, weighing almost 300 pounds, featuring lit chandeliers and a replica of first lady Michelle Obama’s garden.

The inaugural guests included Capt. Luis Avila, 42, and his wife and son. Avila, still hospitalized, lost a leg and suffered a brain injury from a makeshift bomb in Afghanistan during his fifth wartime deployment.

They joined about 85 volunteers from 38 states and the District of Columbia. Tracy Jacobson, 54, a retired detective from Irvine, Calif., was among the volunteers. “Amazing,” she called the experience. “One of the most incredible things of my life.”

A replica of Bo, the Obamas’ furry, black-and-white Portuguese water dog, appears outside the gingerbread house, and, as in past years, has a starring role throughout the White House’s Christmas pageantry.

The estimated 90,000 visitors who will stream through in coming weeks will receive a bookmark with check-off boxes to signify they’ve spotted Bo ornaments or “Boflakes” in eight locales, including the Red Room and the Green Room.

His own quarters — the Bo-val Office, so to speak — is not part of the tour.