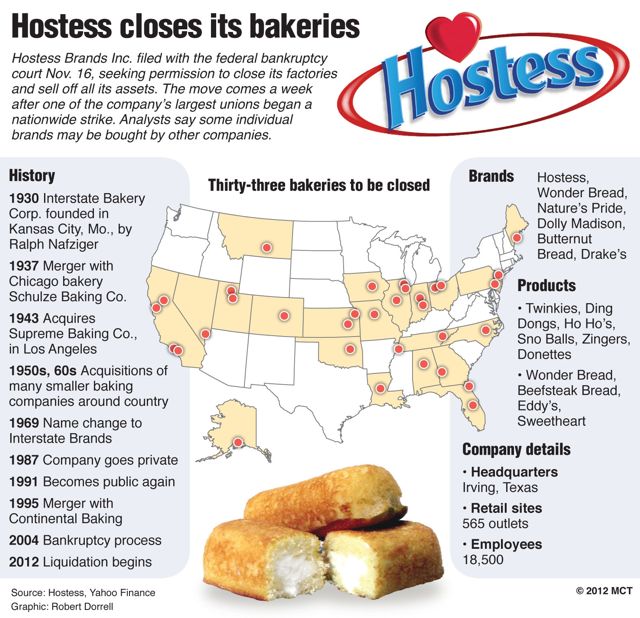 Twinkies maker Hostess Brands Inc. won court approval to start shutting down operations, selling its assets and laying off its 18,500 workers, after the failure of an 11th-hour mediation to try to resolve a labor dispute.

U.S. Bankruptcy Judge Robert Drain gave Hostess the go-ahead Wednesday to sell its plants and brands after he presided over the closed-door talks Tuesday with the company and the striking Bakery, Confectionery, Tobacco and Grain Millers Union, which represents about 5,000 Hostess workers.

Heather Lennox, a lawyer for Hostess, said in court that the company has received a “flood of inquiries” from potential suitors.

An outpouring of concern and nostalgia broke out last week when Hostess said publicly that it would shut down. It held back to give mediation a try, but Wednesday’s action kindled disappointment among workers’ families.

“This is truly a sad day for thousands of families,” said Ken Hall, general secretary-treasurer of the non-striking Teamsters union, the largest at Hostess with 6,700 members.

The 82-year-old company said that it would shrink its head count to 3,200 workers in the coming months and that those remaining would stay until the liquidation is done, which it said would take a year.

Hostess, the maker of Ho Hos, Ding Dongs, Dolly Madison Cakes, Wonder bread and other products, filed for bankruptcy in January for the second time in a decade.

It first moved to shut down its operations Friday, blaming the union for a strike that “crippled its operations at a time when the company lacked the financial resources to survive a significant labor action.”

The baker said its “inflated cost structure,” which it attributed primarily to its collective bargaining agreements, put it at a “profound competitive disadvantage.”

Workers who walked off their jobs accused Hostess of awarding pay increases to executives while pillaging employee benefits and wages.

In court Wednesday, Drain noted that the failure of the talks was the result of disagreements and not the fault of either party. He allowed the company to remain in control of the liquidation, rejecting a request to turn the Chapter 11 proceeding into one overseen by the U.S. trustee’s office under Chapter 7.

The company will return to court later to seek approval to sell off specific brands, which financial advisors testified could generate $1 billion in proceeds.

Last year, Hostess had sales of $2.45 billion, down 2 percent from the year before, according to estimates from research group PrivCo. The company’s net loss more than doubled to $341 million from $136 million, according to the report.