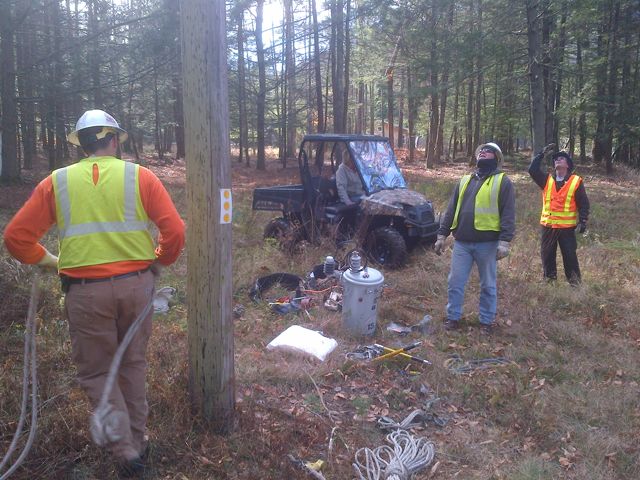 CEDAR RAPIDS, Iowa — Nov. 6, 2012 — Alliant Energy’s third wave of restoration crews are arriving in New York Tuesday or Wednesday, depending on weather. To date, approximately 205 Alliant Energy workers from Iowa, Wisconsin, and Minnesota have responded to damage caused by Hurricane Sandy. The first wave of crews left on Oct. 28, and the majority of those workers are still in New York.

The latest group of 63 will be working on the natural gas system around West Hempstead, NY. They are working for National Grid. This group incorporates 28 workers from Wisconsin, 34 workers from Iowa, and one worker from Minnesota.

“We’re proud of our staff that headed east. To date, our crews have been very safe while working in extreme conditions and mountainous terrain,” said Vern Gebhart, Vice President – Energy Delivery Operations. “The reason we’re able to give such a large response is because our staff back home have really stepped up and provided great support.”

“By the end of Tuesday night, Alliant Energy crews will have logged more than 19,500 hours on the East Coast,” said Gebhart. “And we know we’re not done yet.”

The latest estimates from the Department of Energy are that 67,000 utility workers, from 80 different companies are responding to the restoration effort on the East Coast. At its worst, Hurricane Sandy affected more than 8.5 million electric and gas customers. As of Tuesday morning, crews had restored power to more than 7.3 million customers.