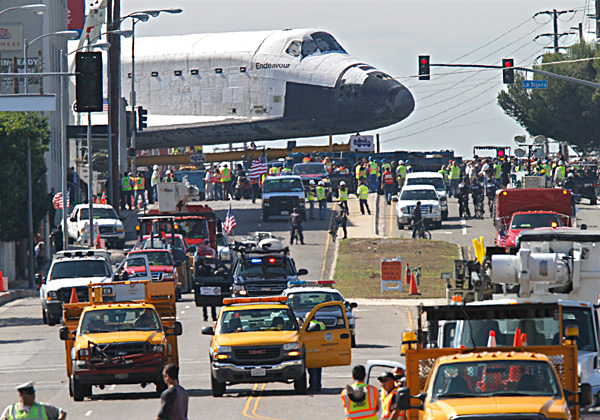 LOS ANGELES — The space shuttle Endeavour arrived in Los Angeles last month with an air of majesty, soaring over ocean and mountains, swooping past the Hollywood sign and Disneyland, and dazzling crowds gazing up from the ground.

Endeavour lost a little of that grandeur Friday, towed by four trailers, inching down city streets from Los Angeles International Airport toward its new life as an exhibit at the California Science Center. But it was greeted with fanfare by large crowds who marveled at its sheer size against the city backdrop.

The journey, which is to conclude Saturday night, provided a view of L.A. less picturesque but perhaps much more realistic than the flyover’s postcard-perfect scenes. The shuttle looked a little more beat-up on the ground than it did from the sky, as did the locales.

There were blocks of strip malls, traffic snarls, a preoccupation with the 405 Freeway and, increasingly as the day went on, opportunists on every corner.

“Postcards four for $1! Postcards four for $1,” shouted Antwan Wells, one of many vendors trying to turn a profit from the throngs who turned out to catch a glimpse of the shuttle. Restaurants expanded their hours, teenagers hawked homemade T-shirts for $30 and school boosters set up a bake sale.

“It’s crazy money,” said Wells, who claimed he made $2,000 by early afternoon. “These postcards are going like hot cakes!”

Moving the shuttle has been an epic undertaking, involving hundreds of workers who removed traffic lights, turned off power lines and cleared crowds so the Endeavour could make it through the streets.

It created a scene out of one of L.A.’s famous disaster movies, the five-story-tall shuttle nudging between buildings as spectators looked on atop gas station roofs, on cranes and even seated atop those downed traffic lights.

By Friday afternoon, the shuttle was making its slow crawl west of LAX, greeted by thousands of people who seemed to ignore police warnings and lined sidewalks, parking lots and balconies. The shuttle drew people from many walks of life: parents with young children, space aficionados and workers taking a break from their jobs.

Bill Douglass, 80, is a self-described “space nut.” He’s seen almost every shuttle launch since he retired in 2000, making the four-day drive from his home in Scotts Valley, near Santa Cruz, Calif., to the Motel 6 in Cocoa Beach, Fla., where he stayed for each send-off.

So he wasn’t about to miss Endeavour’s final trip.

Douglass traveled from his Northern California home to a relative’s house in Orange County. He drove up early Friday to the Westchester parking lot where he was one of the “rivers of people” who turned out to snap pictures.

“It’s saying goodbye to it, celebrating the fact that it’s retired,” he said. “I couldn’t believe it when I first saw it. This is the closest I’ve ever been to a real one.”

A short time later, the masses had congregated on Manchester Boulevard just west of La Tijera Boulevard and people meandered around one another vying for the best photo spots.

Neev Zaiet, 21, teetered atop a yellow Hummer parked just west of the shuttle as she waited to snap a picture on her iPhone.

“Someone took the cones down and we just drove in,” she said through a smile.

As the shuttle drove off, a chant gained volume: “USA! USA! USA!”

Moving the 170,000-pound shuttle on the ground is not an inexpensive or easy task. Science center officials said that the bill for the move would top $10 million, with no cost to taxpayers. The Exposition Park museum has raised money from donors for the shuttle project, and several companies involved in the move donated services including work and consultation.

The move was incredibly complex from an engineering standpoint. Four computer-controlled transporters move the shuttle at a speed of no more than 2 mph, helping it negotiate complex turns and avoid streetside obstacles.

It’s going to take the acrobatics to get the shuttle through some tight squeezes along the route. At one point, the spacecraft will have just a few inches of clearance between buildings.

One of the most anticipated maneuvers would be crossing the 405 Freeway on the Manchester bridge. The California Department of Transportation required that the shuttle be removed from its transporters and taken across using dollies.

“I’m glad I’m not driving the vehicle,” said retired astronaut Mark Kelly, the commander of Endeavour’s final space mission. “I’m interested to see how it goes. Hopefully, they don’t put a scratch on it.”