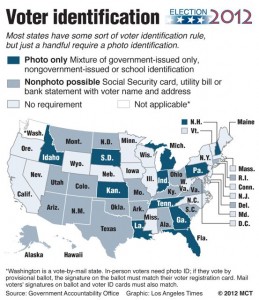 WASHINGTON — Earlier this year, voting rights advocates foresaw a cloud over this year’s election because new voting laws in Republican-led states tightened the rules for casting ballots and reduced the time for early voting.

But with the election less than a month away, it’s now clear those laws will have little impact. A series of rulings has blocked or weakened the laws as judges — both Republicans and Democrats — stopped measures that threatened to bar legally registered voters from polling places in the November election.

“Courts see their role as the protectors of the core right to vote,” said Ned Foley, an election law expert at Ohio State University.

The laws were the product of a Republican sweep in the 2010 election. The GOP took full control in such states as Wisconsin, Pennsylvania, Ohio and Florida, and soon adopted changes in their election laws.

Some states told registered voters they must show a current photo identification, such as a driver’s license, even if they did not drive. Others, including Florida and Ohio, reduced the time for early voting or made it harder for college students to switch their registrations.

Republicans defended the laws as protections against fraud. But advocates for increased access to the polls cast them as “voter suppression” laws that could prevent tens of thousands of poor and elderly voters, racial minorities and students from casting ballots. And Democrats, who can usually count on support from these voters, worried that the laws could even sway the outcome in the presidential race if it were close in key states.

Since the disputed presidential election of 2000 and the Supreme Court’s Bush vs. Gore decision, increasingly partisan disputes over election laws have arisen. In general, Republicans have called for tighter restrictions, while Democrats have opted for looser and more generous rules.

The Constitution gives states the power to set the rules for elections, and judges usually uphold regulations adopted by state legislatures. But this year, judges took a more skeptical view of regulations that could stand in the way of voters.

And federal judges pressed Ohio and Florida to restore most of the early voting days that were cut under new laws.

Another federal judge in Ohio said the state must count the ballots of voters who go to the right polling place but are sent to the wrong table for their precinct. Four years ago, 14,000 votes were lost for that reason.

A second federal judge set aside part of the Florida law that had prevented groups such as the League of Women Voters from registering new voters.

“It’s been a remarkable series of victories,” said Wendy Weiser, a lawyer for the Brennan Center for Justice at New York University, a liberal advocacy group that has opposed the new restrictions on voting.

Most voters support voter ID laws, according to opinion surveys. Pennsylvania Secretary of State Carol Aichele said her state’s photo ID law was “on track to be fully implemented in future elections. (It) is designed to preserve the integrity of every vote by doing what we can to make sure each voter is who they claim to be.”

None of the rulings this year conclude that photo ID laws are unconstitutional. Rather, the judges said that if states plan to enforce such a new rule, they must ensure that people legally registered to vote — including those who are old and do not drive — can easily obtain the identification they need.

The Pennsylvania Supreme Court, which has three elected Republicans and three Democrats, said it would allow “no voter disenfranchisement” under the state’s new voter ID law. And on that basis, a state judge decided last week that it could not be enforced this year. The court was told that hundreds of thousands of Pennsylvania’s registered voters did not have the kind of photo ID card that would allow them to vote.

In a Texas case, federal judges focused on the difficulty of obtaining the right photo ID card from a state motor vehicle office. Because about a third of Texas counties do not have such an office, thousands of legal voters who do not drive — and, in many instances, have no access to a car — faced the prospect of finding a way to travel more than 200 miles round trip to obtain ID cards, the judges said.

Rick Hasen, a law professor at the University of California, Irvine, said many of the rulings might not stand for long. “The victories over voter ID laws are likely to be short-lived,” he said.

The Supreme Court has not yet weighed in this year on the major election law disputes. Four years ago, however, the justices upheld an Indiana photo ID law, and Hasen predicted they would look favorably on the new state laws so long as voters were given enough time to comply.

And not all the rulings went for the challengers. In Florida, a judge refused last week to stop state officials from seeking to remove noncitizens from the voting rolls. People who are not citizens have no right to vote, the judge said.