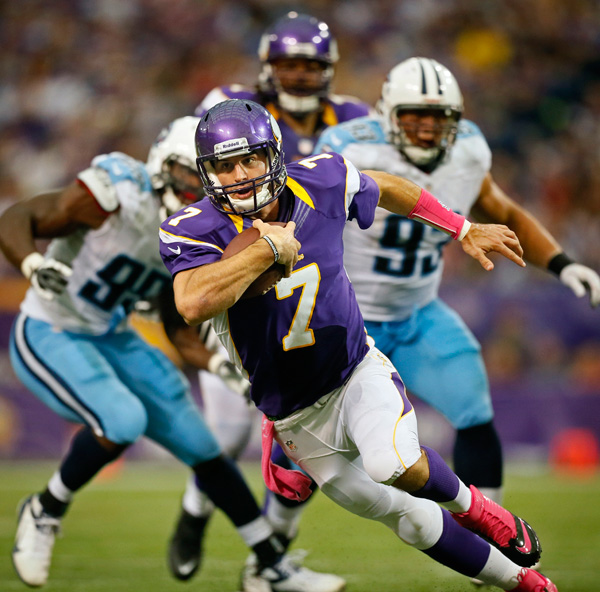 MINNERAPOLIS — Amazing what success can do for a team’s confidence.

Consider this scenario from midway through the fourth quarter Sunday at Mall of America Field: The Vikings led Tennessee 23-7 and seemed content with pocketing their third consecutive victory without trying to raise the degree of difficulty.

Head coach Leslie Frazier had a simple directive for his offense: Run until you can’t run anymore.

Drain the clock. Put the blowout away.

But offensive coordinator Bill Musgrave wanted more. Like a hyper 8-year-old trying to convince the baby sitter to let him stay up until midnight, Musgrave fought to get his way.

Frazier asserted that “using the clock was more important than a touchdown.”

Musgrave insisted he could get seven points with his next play call.

So on second-and-5 from the Tennessee 15, Musgrave dialed up his home run call for tight end Kyle Rudolph.

So what the heck? Ponder fired high and deep into the back of the end zone. And Rudolph, blanketed by safety Michael Griffin and then sandwiched by Jordan Babineaux, simply used those magnetic, dinner plate-sized hands of his to haul in a ridiculous 15-yard touchdown.

That was the exclamation point on the Vikings’ 30-7 blowout. And it left Frazier chuckling away on the sideline.

“I turned around and looked at (Musgrave) and said, ‘Good job, Bill,’ ” Frazier said. “So much for using clock and running the ball.”

Three weeks ago, after a mistake-filled loss in Indianapolis, this team seemed too green and too error-prone to turn things around. But since that stumble, they haven’t trailed for a second in three games.

They’ve been detailed with their preparation and sharp with their execution.

On Sunday, they took an unconfident Titans team and beat it senseless. For the third week in a row, the defense dialed in early and never let up.

Erin Henderson stopped Titans running back Chris Johnson for just 1 yard on his second carry. Letroy Guion didn’t let Johnson get even that much on his next run.

That was the trend.

After busting loose for 141 yards in Week 4, Johnson sputtered, rushing for only 24 yards on 15 carries. Nine of his runs were for 2 yards or fewer.

“You keep him inside that box,” Jasper Brinkley said. “And you run to the ball.”

Suddenly, there seems to be a simple formula on defense, with coordinator Alan Williams turning his players loose to do what they do best.

Through three quarters, Tennessee was netting an average of 9 yards per possession.

That’s not to say Sunday’s win was perfect. Safety Harrison Smith was ejected in the second quarter after shoving back judge Steve Freeman, a hotheaded blunder that could result in a suspension.

But then he settled back in and completed 12 of his final 13 passes for 100 yards and two touchdowns.

“A year ago, I don’t know if he would have been able to stay as engaged as he was after the second pick,” Frazier said.

In addition to the Rudolph TD, Ponder’s late surge included arguably the easiest and most impressive 10-yard touchdown pass in Vikings history.

That went to Percy Harvin on a bubble screen. Ponder barely moved his feet, catching the shotgun snap and dinking the ball a few yards to this right. Then there went Harvin, picking up a Rudolph block, delivering a nasty juke on Babineaux, another cut past Colin McCarthy and a pinball-bounce off Akeem Ayers into the end zone.

“I could probably do that, too,” Ponder joked.

Added Rudolph: “We always say we wish we could have Percy’s speed and balance just for one day. Just to see what it’s like.”

Suddenly the Vikings have become a broken record. They’re winning consistently and delivering the same explanations week after week.

The defense is united. The young quarterback is growing up. And Harvin is Harvin, so dynamic that he continues to give opponents headaches with all the ways he dizzies them.

Right now, Harvin and the Vikings have no intention of slowing down.