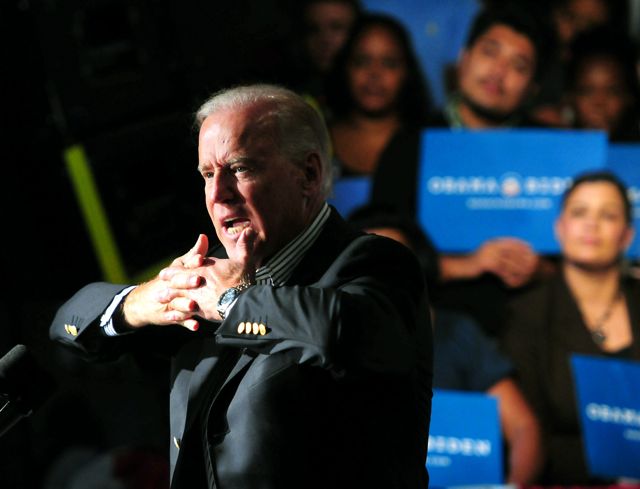 By Tim Funk and Jim Morrill, The Charlotte Observer –

CHARLOTTE, N.C.—Even as he accused Republican Mitt Romney of gunning for the middle-class with plans to raise their taxes, Vice President Joe Biden Tuesday inadvertently gave ammunition to GOP critics.

“How they can justify raising taxes on the middle class that has been buried the last four years?” Biden asked more than 1,000 supporters at the N.C. Music Factory. “How in the Lord’s name can they justify raising their taxes with these tax cuts?”

The exchange—later joined by GOP vice presidential nominee Paul Ryan—came as Biden made his sixth trip of the year to North Carolina with stops in Charlotte and Asheville. It underscored the importance of a state that both sides are trying hard to win.

But neither side was willing to wait.

“Vice President Biden, just today, said that the middle class, over the last four years, has been ‘buried’—we agree,” Ryan, who will debate Biden next week, told an afternoon rally in Iowa. “That means we need to stop digging by electing Mitt Romney â€¦

“Another day, another desperate and out-of-context attack from the Romney campaign,” said Obama campaign spokeswoman Lis Smith. “As the vice president has been saying all year and again in his remarks today, the middle class was punished by the failed Bush policies that crashed our economy—and a vote for Mitt Romney and Paul Ryan is a return to those failed policies.”

With early voting already under way in several states, both campaigns are fighting to win every news cycle and stoke the passions of their supporters on Twitter and Facebook.

In this overheated environment, the campaigns are on the lookout for any advantage—including a gaffe by one of the candidates. Biden’s remark could well turn up in Romney-Ryan ads or even get a mention by Romney in his kick-off debate with Obama.

Before Republicans pounced on Biden’s comment, he appeared to be offering a possible preview in Charlotte of the Democratic strategy in the upcoming debates: Cast the Romney-Ryan ticket as anathema to the middle class,

Once the vice president arrived at the Music Factory on Tuesday morning, he wasted no time in fixing the blame for the nation’s economic woes on the GOP.

“(Republicans) talk about the Great Recession like it fell out of the sky in 2008,” he said.

He charged that policies pursued by George W. Bush—including big tax cuts and relaxed regulation of Wall Street—brought on the recession. The previous administration also drove up the national debt, Biden said, by not paying for tax cuts, the wars in Iraq and Afghanistan, and a prescription drug benefit bill.

“What did it do?” Biden said. “It produced the Great Recession, which absolutely eviscerated the middle class.”

Under Romney-Ryan, Biden said the middle class would continue to take hits, as would disabled children and nursing home patients who rely on Medicaid — one of the programs that would get a federal funding cut in a House-passed budget proposed by Ryan.

“Show me your budget, and I will tell you what you value,” Biden said, adding the Republicans want to change Medicare in ways that would cut benefits for current seniors and eventually replace the program with vouchers for those now in their mid-50s and younger.

Republicans say their Medicare changes would not affect those in or near retirement. Those retiring later would get a choice to keep traditional Medicare or opt to buy private insurance with some help from the government—a plan the GOP says will save the retirement program from bankruptcy.

Biden contended that the rich don’t need or want the tax cuts the GOP is calling for. And the cost of providing them, he said, would cost the middle class in higher taxes and cuts in programs like student loans.

And, he told the crowd, Romney’s videotaped comments about 47 percent of the country being dependent on the government proved he is out-of-touch with America.

“Look, folks, this country is neither dependent nor in decline. I don’t recognize the country they’re talking about,” he told the crowd.

With polls showing the presidential race a tossup in North Carolina, Biden and a parade of warm-up speakers urged people to work hard to turn out the vote when early voting starts Oct. 18.

“That’s our lection day,” said U.S. Rep. Mel Watt of Charlotte, who led the crowd in a call-and-response chant. “Because we’ve got to deliver our votes on â€¦”

Biden continued the theme, even quieting some audience members who booed at his mention of Romney-Ryan.

“We don’t need your boos, we need your work,” he said. “The reason we’re going to win North Carolina is we have the best ground game you’ve ever seen.”

After the event, Robert Reid, Romney’s North Carolina spokesman, defended the GOP ground game. He also pointed to the state’s 9.7 percent unemployment rate as well as a number from May’s Democratic primary: 200,000. That was the number of voters—nearly 21 percent—that chose “no preference” over Obama.

The Tar Heel State, which Obama carried in 2008 by only 14,000 votes, is one of nine “battleground states” where the election is expected to be decided.

Biden’s visit was the latest sign that the Obama campaign would keep fighting to win North Carolina—or at least make the Romney campaign spend money here instead of other swing states such as Ohio or Florida,

North Carolina is a must-win state for Romney: No GOP presidential candidate has won the White House and lost this state since Dwight Eisenhower in 1956.

Biden and his traveling party had a rocky arrival in the Queen City. Their landing at Charlotte Douglas International Airport was delayed by about 40 minutes because of severe thunderstorms north and west of the city.

The vice president referred to “queasy stomachs” before the landing, and a Wall Street Journal reporter said an attempted landing about 11 a.m. at the airport was aborted. He said Air Force 2 circled Charlotte for about a half-hour, waiting for the storms to move away, and then made a more peaceful landing.

Later Tuesday, Biden spoke to a rally at the University of North Carolina, Asheville.