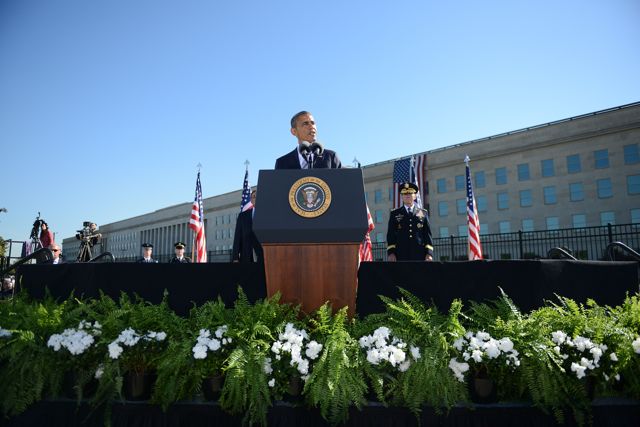 WASHINGTON—President Barack Obama and Republican nominee Mitt Romney planned a low-key day devoted to the memory of the Sept. 11 attacks, playing down politics as much as possible despite the heated presidential campaign.

Tuesday morning, hundreds of White House staff gathered with Obama on the South Lawn to mark the 11th anniversary of the attack that killed more than 3,000 Americans.

Marines presented the American flag, and the president and first lady stood with heads bowed, facing the National Mall in the distance, to observe a moment of silence.

Obama was scheduled to later visit the site of the attack on the Pentagon.

Romney was scheduled to be in Reno, Nev., to address National Guard members, many of whom served multiple tours of duty in Iraq and Afghanistan in the wake of the attacks.

The political cease-fire doesn’t extend as far as the one between Obama and his 2008 opponent, Sen. John McCain. Then, in the heat of their race for president, the two joined together to commemorate the anniversary.

But Obama and Romney planned to pause playing their negative TV ads for the day.

And each plans to make remarks focused on the anniversary.

“On this most somber day, those who would attack us should know that we are united, one nation under God, in our determination to stop them and to stand tall for peace and freedom at home and across the world,” Romney said in a statement.

White House spokesman Jay Carney said Obama hoped all Americans would take a moment to reflect upon the events of Sept. 11, 2001, “and all that our country has been through together since then.”