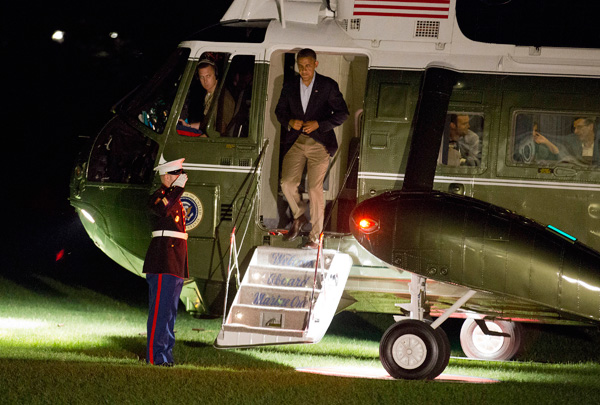 BOSTON — After a week in which Democrats repeatedly attacked his economic plan as beneficial to the rich and devastating to the poor, Republican nominee Mitt Romney insisted Sunday that his tax and budget proposals would help rebuild the middle class in America.

During a series of lengthy talk show interviews, Romney and his running mate, Paul D. Ryan, declined to go into detail on how they would pay for across-the-board tax cuts while balancing the budget over two terms in office.

President Barack Obama’s campaign pounced on the lack of specificity, arguing that Romney might do away with popular aspects of the tax code such as the mortgage interest deduction. Obama argued during a taped appearance on CBS that his rival’s call for spending cuts without a plan to create higher revenues wasn’t mathematically possible.

The back-and-forth over the budget — and, later, Medicare, on the second day of a Florida bus trip by Obama — came after two weeks dominated by the parties’ national conventions. New polling shows Obama has opened up a slight advantage over Romney, but both sides are looking toward October’s debates as the next opportunity to break open the race.

The focus on Romney’s budget was prompted by an appearance on NBC’s “Meet the Press,” where he insisted that he would cut taxes for middle-income Americans but not for the rich. Host David Gregory pressed Romney for just one example of a tax loophole employed by the wealthy that he would close, but Romney would not offer one.

In the same interview, Romney repeated his pledge to repeal the president’s health care law but stressed that he would preserve one of its most popular provisions — that Americans with pre-existing conditions can get coverage. Romney did not explain that his plan would cover those with pre-existing conditions only if they had already had uninterrupted insurance coverage.

“I’m not getting rid of all of health care reform,” Romney said. “There are a number of things that I like in health care reform that I’m going to put in place. One is to make sure that those with pre-existing conditions can get coverage. Two is to assure that the marketplace allows for individuals to have policies that cover their family up to whatever age they might like. I also want individuals to be able to buy insurance, health insurance, on their own as opposed to only being able to get it on a tax-advantage basis through their company.”

Ryan was questioned on the budget plan during an interview on “This Week” with George Stephanopoulos, after the ABC host played a clip of former President Bill Clinton saying the Romney-Ryan tax plan would eliminate deductions for middle-class families. Stephanopoulos asked how the Republican plan would stay revenue neutral without eliminating those deductions.

“Those claims have been pretty discredited,” Ryan said. “There have been five different studies that show — that this plan works. … We think the secret to economic growth is (to) lower tax rates for families and successful small businesses by plugging loopholes.”

Stephanopoulos sought examples — asking how voters could accept the plan if they didn’t know how it would work. Ryan replied that the Romney campaign wanted to give Congress a chance to debate the details.

“We want to have this debate in the public,” Ryan said.

For his part, Obama’s response played off of Clinton’s lancing destruction of Romney at last week’s Democratic convention.

“Governor Romney said he wouldn’t take a deal with $10 of spending cuts for $1 of revenue increases. And the problem is the math — or the arithmetic, as President Clinton said — doesn’t add up,” Obama said in an interview on CBS’ “Face the Nation.”

Later, during his Sunday bus tour through critical precincts of central and southern Florida, where seniors are a huge portion of the vote, Obama emphasized Romney’s plan to change government health care for senior citizens.

Romney has said he would try to restore Medicare to solvency by creating an array of options for seniors starting in 10 years. His plan would try to contain Medicare costs by creating a “premium support system” in which seniors would get fixed-amount payments that they could use to purchase insurance. They could also stay in the traditional Medicare program, though Romney has been vague about whether they would have the same benefits as current seniors.

On Sunday, Obama called that plan a voucher program that would shift rising health care costs onto seniors.

“I want you to know, Florida, I will never turn Medicare into a voucher program,” Obama told a crowd in Melbourne. “Their voucher plan for Medicare would bankrupt Medicare. … Our plan strengthens Medicare.”

A Romney spokesman called the statements a “false attack” and a “sign of desperation,” and said that Obama’s health care law cuts Medicare costs by $716 billion over the next 10 years. (The cuts are in reimbursements to hospitals and insurers, not in benefits.)

Obama’s effort to highlight that issue for seniors was overshadowed in local news coverage by his interaction with an exuberant supporter at a pizza joint.

“Everybody, look at these guns!” Obama said as he walked in, pointing to Van Duzer’s arms.

The two men laughed and embraced — and then Van Duzer lifted the president about a foot off the ground, according to a pool report filed by a White House correspondent in the room.