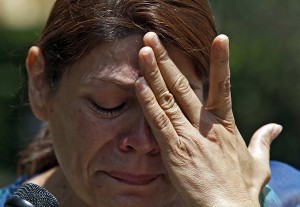 LOS ANGELES—Irma Zamora’s husband urged her not to get out of the car as they approached the scene of a spectacular traffic collision in Los Angeles’ Valley Village neighborhood. But as he pulled over to call 911, she rushed out anyway, eager to help.

A sport utility vehicle had just careened through a local intersection, shearing off a concrete light standard and knocking over a fire hydrant before coming to rest on a front lawn. Water spewed skyward from the broken hydrant and quickly pooled in the intersection.

(PHOTO: Ana Aviles weeps on Thursday, August 23, 2012, remembering her sister, Irma Zamora, who died while trying help an accident victim. Two women died after being electrocuted and six others were injured Wednesday night when an SUV smashed into a fire hydrant and light pole in Valley Village, California, and sparked an electrical hazard. )

Zamora ran toward the wrecked SUV and stepped into an electrified pool of water. She was immediately — and fatally — electrocuted, struck by what firefighters estimate was 48,000 volts of electricity.

Such selfless action was typical of Zamora, her sister Ana Aviles said Thursday. “She always helped people. She didn’t measure the consequences. She was trying to save a life.”

Zamora, 40, of Burbank, was one of two women who died Wednesday night in what police and witnesses described as a bizarre and tragic series of events. The name of the second woman, who touched Zamora after she had been stricken and was also electrocuted, has not been released.

At least half a dozen others, including the driver of the SUV and a Los Angeles police officer, were hospitalized after they too received electrical shocks while trying to aid the victims.

“It’s horrific, very sad for the families of these women and everyone involved,” said Los Angeles Police Detective Bill Bustos of the Valley Traffic Division. “They were just trying to help.”

Mayor Antonio Villaraigosa, who visited the site of the accident Thursday with other city officials, called the two women heroes and praised their instinct to render aid. But he also urged people to take time to assess such situations and wait for professionals to arrive. “We don’t want anyone hurt,” he said.

Police said the driver of the vehicle, a 19-year-old from Glendale who has not been identified, was heading west when he tried to negotiate a right turn onto from the left lane. He was traveling at speeds believed to be well above the 35-mile-per-hour limit, police said.

Alcohol was not a factor, Bustos said.

Residents of the densely populated neighborhood described a chaotic scene, as gushing water spread rapidly through the darkened intersection. Would-be rescuers raced up from all directions.

“It was horrible, chaotic, just horrible,” said Liz Casmier, who lives nearby. Casmier said at least 50 people gathered within minutes of the crash.

Jacqueline Montgomery, who manages a nearby apartment complex, was walking a friend to his car when she saw the speeding SUV sliding into the turn.

As people began to pour out of the many apartment buildings in the area, Zamora and her husband pulled up, several eyewitnesses said. Zamora raced toward the SUV, apparently intent on helping the driver, but stepped into the water and was instantly shocked.

“We saw her standing there and shaking” from the electrical current, said a resident named Jeanette, who declined to give her last name. “I can still see it vivid in my mind.”

Zamora’s distraught husband ran toward his wife, yelling to her, the woman said. Several neighbors restrained him, fearing he too might be injured.

Twin brothers Skyler and Beau Maxon, 23, who moved to Los Angeles from Salt Lake City two years ago to pursue acting careers, also rushed to the scene from their apartment.

Skyler Maxon said his brother approached Zamora, touching either the injured woman or the electrified water near her and immediately suffered a shock. He was in intensive care Thursday but is expected to live, his brother said.

Maxon said as he and another man tried to help his brother, another woman, not aware of the danger, ran toward Zamora. “We were yelling at her to stay back, but I don’t think she understood,” he said.

The woman touched Zamora, then collapsed.

Late in the day, Zamora’s family members and friends set up a collage of pictures of her at the accident site and and several young relatives released balloons in her memory.

Since 1993, she had worked at Lawyers Title Co. in Burbank, where she had moved up from the switchboard to an assistant title officer. She was friendly and well-liked, said the firm’s David Cronenbold.

“She will be remembered as a person who passed away doing what she always did, which was helping other people and putting others before her own needs,” he said.