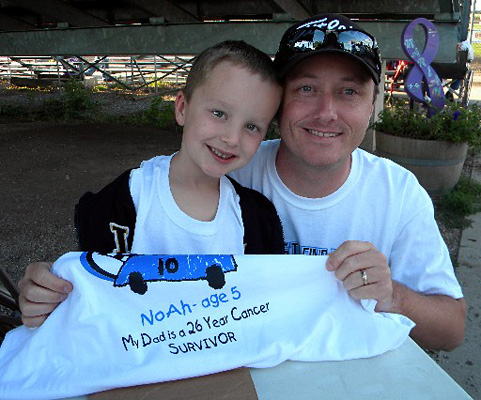 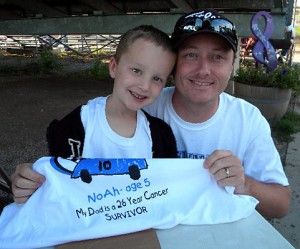 MASON CITY – Last week the races at the North Iowa Events Center was canceled due to rain, so Racing for a Cure was rescheduled for Sunday, August 19th.

Racing for a Cure is a way to make money for the American Cancer Society to help find a cure for the disease. One of the ways they were making money Sunday night, was selling t-shirts designed by five year old, Noah Honn. He was available to sign the t-shirts that said, “My Dad is a 26 Year Cancer Survivor”.

“It took Noah only about a half hour to come up with idea, draw and color the design,” said Jenni.

Noah Honn is the son of Brett and Jenni Honn. Noah said he is really happy to have his dad cancer free.  (Noah and Brett are pictured, right.)

The races were exciting to watch. Joe Willier, #96, who won his heat race, had a bad accident during the feature Stock Car Race. He was okay, but the car receive some body damage. Willier was coming through a four wide on the fourth turn when the cars got too close and all lost control. Larry Portis took home the win, adding more points to his outstanding performance this year. 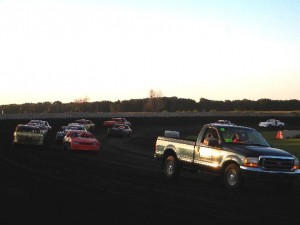 The red and black of Kyle Germundson’s Number 69 race car is pretty popular in Victory Lane this year. Germundson got another First Place finish in the Sports Mod Feature. In second place when a caution flag slowed down the race, Germundson took advantage of the situation, took the lead, and never looked back.

Another accident happened during the Modified Feature. The race was halted for around twenty minutes when J.J. Wise, #68 was taken by ambulance to Mercy Medical Hospital. He had facial injuries caused by an accident that occurred between turns one and two when his car turned and went backwards off the track. Levi Nielsen was the Feature winner of the Modifieds. 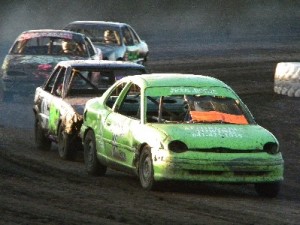