Paul Ryan is well-liked back home, but is it enough to deliver? 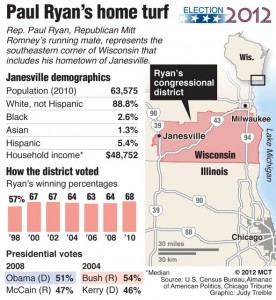 JANESVILLE, Wis. — The small Wisconsin city of Janesville, a heavily union town that has long been a reliable vote for Democratic presidential candidates, including Barack Obama, isn’t the obvious place to produce and support a revolutionary from the right such as Rep. Paul Ryan.

Ryan has taken on a national role as the GOP’s ideological standard bearer in the past few years. In adding Ryan to his presidential ticket, Mitt Romney has aligned himself with a leading Republican voice for shrinking government safety-net programs and largely privatizing Medicare and Social Security.

But Ryan backers in his hometown tend to talk about him more as a good local guy than as the national leader of a conservative movement to transform the federal government. And it’s questionable whether his presence on the ballot will be enough to overcome Obama’s lead in Wisconsin, where polls generally show the president ahead of Romney by about 6 percentage points.

David Canon, a political science professor at the University of Wisconsin-Madison, said adding Ryan to the ticket should help Romney gain 1 or 2 percentage points but probably not enough to carry the state. Ryan is just one of eight members of the U.S. House of Representatives who are from Wisconsin, and he isn’t particularly well-known to voters statewide, Canon said.

A national Gallup poll released Wednesday showed no appreciative bounce so far for the Romney campaign in naming Ryan to the ticket. Still, Canon predicted that the addition of Ryan will motivate some Republicans in his native state, particularly in his home area of southern Wisconsin.

Ryan’s family has been prominent for generations in Janesville, a small blue-collar city of more than 60,000 people staggered by the closure of its General Motors assembly plant four years ago.

Janesville residents have known Ryan as their congressman for the past 14 years. For much of that time he voted as a fairly standard Republican, supporting Bush-era policies for federal spending such as the bailout of banks and automakers, as well as Medicare prescription-drug coverage.

People in Janesville have an experience with Ryan that is different from the rest of the country.

Nancy Wixom’s granddaughter and Ryan’s son are in the same class at St. John Vianney Roman Catholic school in Janesville. She said she’d known the family for many years and saw Ryan at school functions and around town in a T-shirt and ball cap, maybe going to a performance of the local Rock Aqua Jays water-ski show team.

Ryan is a solid, churchgoing guy, she said, who is true to his word and would do a good job as vice president. Still, she paused when she was asked about Ryan’s “Path to Prosperity” budget plan, which is what vaulted him to prominence and a shot at the vice presidency.

“Being the age I am, I’m a little concerned about some of it,” she said. “And I have some doubts about his stand on women’s issues.”

Wixom’s friends aren’t Ryan fans. They just shook their heads when the conversation turned to the possibility that he could be a heartbeat from the presidency.

Local Ryan supporters such as Ray and Helen Flood, while saying that the government needs to stop spending so much, don’t mention his “Path to Prosperity” budget plan until they’re asked about it.

They focus on Ryan’s personal characteristics: They like him because he is smart, doesn’t get rattled and is a family man who comes home to Janesville three days a week and doesn’t rent a house while he’s in Washington the rest of the time.

“You know what I like about him? Four days a week he sleeps in his office,” Ray Flood said.