This news story was published on August 6, 2012.
Advertise on NIT • Subscribe to NIT 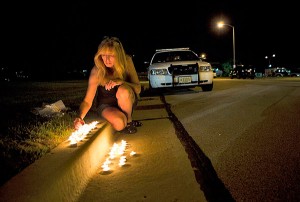 OAK CREEK, Wis. — They couldn’t have come from two more different worlds: One of them, Lt. Brian Murphy, a classic New York-style cop with more than two decades on the streets. The other, Satwant Singh Kaleka, a deeply religious native of India who come to the U.S. as an impoverished immigrant and made his way up buying gas stations.

Yet here they were, both cut to the ground and shedding blood at different parts of the Sikh Temple of Wisconsin on Sunday. Both had come had come up against the gunman whose murderous path ultimately left six people dead. Murphy was armed with a police firearm, Kaleka with a butter knife. Both paid dearly, Kaleka with his life, Murphy nearly so — he lays critically wounded in a nearby hospital, but is expected to survive.

(PHOTO: Marianne Zirkle lights candles in support of the victims of the shootings across the street from the Sikh temple, August 5, 2012, in Oak Creek, Wisconsin.)

The pain of tragedy seems always to be accompanied by a search for a compensating story of courage. In Oak Creek, there are two such accounts. The public has seized on Murphy and Kaleka as the heroes, their desperate bids to halt the gunman’s rampage being told and retold in community halls, in the newspapers and on talk radio programs.

FBI agents hugged Kaleka’s son before telling him how his 65-year-old father had confronted the much younger gunman with the knife, keeping him away from his wife and other temple followers.

The Sikh community, for its part, started a Facebook page for “Sikhs expressing EXTREME gratitude to Lt. Brian Murphy” in appreciation for urging fellow officers to help the wounded inside the temple despite having been shot nine times himself at close range.

“You are a selfless hero,” wrote Simi Burn Bassett.

Amardeep S. Kaleka, 34, of Los Angeles, said his father had always believed strongly that America was going to be a place of new opportunities for him, his wife and his two boys when he arrived from India’s Punjab region and settled in northern Milwaukee in the early 1980s.

He got a job working at a family member’s gas station, Kaleka said. “He started working a third shift for an uncle and worked his butt off, 16, 18 hours a day. Then he went on to rent one, and then to own one, and at the end, he owned something like eight gas stations. …All with hard work. No tricks. Hard work.”

The elder Kaleka chastised his sons when they complained about discrimination or ill treatment, Amardeep Kaleka said. “He put the largest American flag right on the front lawn, and if you go there, you’ll see the flag there. It looks like it was stolen from an elementary school standing there, it’s so big,” he said.

“We came home and we said, ‘It’s an eyesore, this thing is going to make us look foolish here.’ And he said, ‘You’re an American now. You push the American dream. Study and knowledge and education, that’s what’s going to lead us forward.’ ”

Kaleka said his father used much of his earnings from the gas stations to help build the new Sikh temple, which opened in July 2007, not only with the help of his savings, but the pledges of 24 other community members who put up their houses as collateral for the loan on the property. The elder Kaleka became the president of the temple.

On the day of the attacks, Kaleka said, his father went to the temple much earlier than usual. From what he has been told by law enforcement agents, a trail of blood led from where the elderly Sikh confronted the gunman toward the kitchen, suggesting Kaleka’s knife may have wounded the attacker, though this has not been confirmed. Kaleka’s wife was hiding in terror in a pantry.

“During the battle he took two wounds, but he was able to hold him off,” the son said. “He was doing his best to keep that guy away and get them to security.”

The gunman’s next roadblock was Lt. Brian Murphy, a 51-year-old New York native who still talked with the accent and confidence of a New Yorker. He has served 21 years with the Oak Creek force and was one of three finalists for police chief the last time the job came open. He had received a commendation in 2004 for an investigation into suspected sabotage of electrical lines, according to the Milwaukee Journal-Sentinel.

“He was in very close proximity to the shooter. When he arrived, he came upon someone who was injured, and he was going to assist that individual when the shooter came around him, close to his squad car, and hit him at a close distance,” Edwards said at a news conference on Monday.

Other officers opened fire and killed the gunman, but when they attempted to help Murphy, he told them to go help the other victims first.

“He had been shot nine times — one of them very serious in the neck area — and he waved them off and told them to go into the temple to assist those in there,” Edwards said.

Police administrators have declined further interviews about the confrontation pending the investigation, as have the officers themselves. James Palmer II, executive director of the Wisconsin Professional Police Officers Association, which represents Oak Creek officers, said they have made it clear they don’t want to be the subject of folk tales.

“The officers at this point are really not interested in being viewed as heroes. They feel as though they were simply doing their job, and they are confident that any one of their colleagues would have acted in the same manner. For that reason, they don’t view themselves as extraordinary,” Palmer said.

“While I run the police association, I’m not a police officer, and I have to say I find that kind of extraordinary myself,” he said. “Incredible, actually.”