Best Buy to lay off 2,400 workers, including some Geek Squad 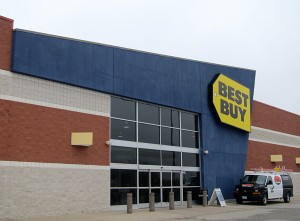 LOS ANGELES — The heart of Best Buy’s customer service model took a blow Friday when the company said it was laying off 600 of its Geek Squad employees and 1,800 other store workers.

The layoffs represent about 1.5 percent of Best Buy’s overall workforce but 3 percent of the company’s Geek Squad employees, who can assist with technical issues inside stores or at customers’ homes.

Best Buy has highlighted its Geek Squad service to keep customers from turning to cheaper online options, often after checking out the goods in Best Buy showrooms.

Best Buy said the layoffs were part of a larger turnaround plan announced in March. The company at that time said it would cut the size of superstores by 20 percent and open 100 Mobile Stores, which mimic the Apple Store approach to customer service by putting Geek Squad employees behind the help desk.

In the process, Best Buy closed 50 of its superstores and cut 400 corporate and support jobs. The changes came after a disappointing holiday selling season.

The next month, Chief Executive Brian Dunn, the architect of the plan, stepped down as news of his relationship with a female employee came to light.

Financial analysts and people who follow the company expressed confusion with this latest move.

“Service is the only thing they compete with now,” said Michael Pachter, an analyst at Wedbush Securities Inc. in Los Angeles. Pachter added that the idea wouldn’t have come from Dunn, saying that in-store layoffs were “the last thing in the world that guy would do.”

The layoffs announced Friday were in addition to store employees who lost their jobs when the 50 superstores closed. That total has yet to be disclosed.

“The Best Buy turnaround strategy is not unlike a really, really big roller coaster,” Robinson said. “It goes up and down and it’s really hard to follow.”

Robinson said that the investors, customers and employees of Best Buy will remain skeptical unless Best Buy lays out its whole plan at once.

“They’re announcing the incremental tactics but they’re not really telling you why,” he said. “Most people aren’t giving companies the benefit of the doubt right now.”

“If you’re cutting the Geek Squad, does that mean people don’t want customer service anymore?” Kerr said. The idea doesn’t add up, he said, “when the No. 1 complaint for Best Buy is customer service. There’s definitely a disconnect.”

A Best Buy spokesman said that some jobs might return if certain types of customer service, such as home theater TV installation or in-store help with mobile phones, prove especially popular in the coming year.