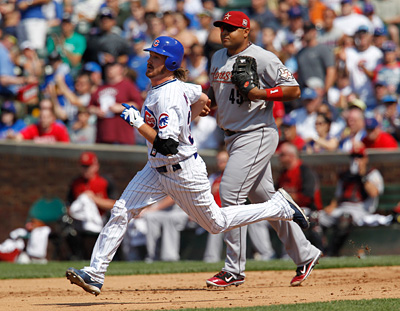 CHICAGO — It was only the Astros, but when you’re the worst team in baseball, any old kind of sweep will do.

The Cubs have two sweeps this season, one over the Padres, who are a game ahead of them in the worst-record department, and now one over the Astros, who are only 2½ games in front of the Cubs in the NL Central.

Sunday’s 3-0 victory — achieved with 7 2/3 shutout innings from Travis Wood and a game-winning single from Anthony Rizzo — means the Cubs have won three of their last four series and 10 of their last 19 games.

And two games in a row over left-handed starters, compared with losing 15 of their first 18.

“That was another pretty dominating outing,” Cubs manager Dale Sveum said of Wood. “That was about as good as it gets, even though he had one of those last time too.

In his last two victories, Wood has allowed only eight hits and walked only one in 14 2/3 innings.

“I’m so relaxed out there, and things keep rolling into place,” said Wood, who started the season in the minors.

Wood even scored the winning run, legging out a double to start the sixth inning. After an intentional walk to Starlin Castro, Rizzo’s single scored Wood. Castro and Rizzo scored on a double by Jeff Baker.

Rizzo has three game-winning RBIs in his five games as a Cub.

“It’s been a lot of fun, a whirlwind,” Rizzo said.

Sveum says: After Castro’s average had fallen below .300, Sveum was asked if Castro knew it. He replied:

“We all know where your average is. We might forget how many RBIs we have or home runs or doubles, but we know going into a game if it’s .296, .298 or .301 or whatever it might be. That’s one stat players always know.”

Sori says: After missing out on an All-Star berth despite hitting 15 home runs in his last 42 games, Alfonso Soriano was upbeat.

“There’s a lot of good left fielders in the National League and every one of them has good numbers,” he said.

Soriano did not start Sunday because, according to Sveum, “(of) how hot it’s been, how hot it’s going to be in Atlanta and (his numbers) just not liking Wandy (Rodriguez) too much.”