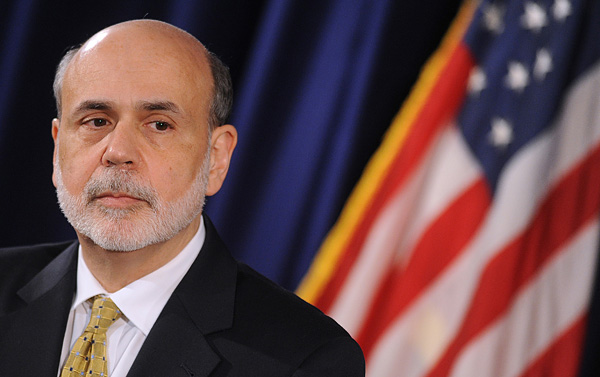 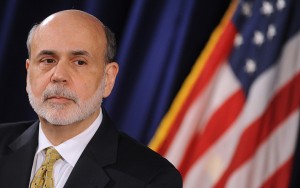 WASHINGTON — As Europe’s problems dragged down the Federal Reserve’s economic outlook for the U.S., the central bank took a modest step to boost the lagging recovery — and signaled it was ready to do more.

“We are hoping for the best,” Fed Chairman Ben S. Bernanke said Wednesday of attempts by European leaders to ease their debt crisis. “But we are prepared, in case things get worse, to protect the U.S. economy and the U.S. financial system.”

The Fed, worried about a spillover from Europe, sharply lowered its forecast for economic growth in the U.S. this year and projected that unemployment could remain near 8 percent through 2014. The grim outlook led Bernanke to talk openly during his quarterly news conference of more large-scale bond buying to stimulate the economy.

The move would be highly controversial in an election year given the strong opposition by many Republicans to the two previous rounds of so-called quantitative easing, which dramatically expanded the Fed’s balance sheet.

But the Fed has few tools left to combat a sluggish economy, considering that short-term interest rates are already near zero. Policymakers have only a limited set of options available and appear to be holding back for now.

“I think they wanted to keep their powder dry,” said Gary Schlossberg, senior economist at Wells Capital Management in San Francisco. “There’s still enough downside risk that they had to do something. By doing nothing, it would just run the risk of unsettling the market.”

The program, dubbed Operation Twist, began in September and was set to expire June 30. The Fed opted to keep the program running through the end of the year, hoping it will keep loan rates low and trigger more borrowing and spending.

Investors had been anticipating that the Fed would extend the program but had been hoping for more forceful action. The stock market dropped initially after the Fed’s action, but the Dow Jones industrial average quickly rebounded to close at 12,824.39, a drop of 12.94 points.

“I think they did the minimum they could have done,” said Nigel Gault, chief U.S. economist at IHS Global Insight. “Clearly if things deteriorate very rapidly in Europe, they’ll do a lot more and they’ll do it very quickly. We’re hostage to what happens over there.”

Bernanke said many European countries are already in a recession and described the troubles there as “a drag on the U.S. recovery.”

Fed policymakers noted that employment growth has slowed in recent months, the housing market “remains depressed” and household spending “appears to be rising at a somewhat slower pace than earlier in the year.”

The Fed has been under increasing pressure to take stronger action to stimulate the economy. But Bernanke defended the decision only to extend Operation Twist, calling it a “substantive step.”

Although mortgage rates are at historic lows, extending Operation Twist until the end of the year will keep rates from going back up, economists said.

The Fed already has swapped about $400 billion in short-term Treasury securities for long-term ones under the program. It will exchange about $267 billion more by the end of the year.

Chris Rupkey, chief economist at Union Bank in San Francisco, said the Fed was trying “to keep the good medicine coming” and predicted it would add stronger medicine in the form of bond-buying if needed.

“I kind of looked at it as the Fed has limited ammunition,” Rupkey said. “Don’t waste it now.”