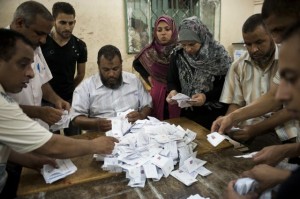 CAIRO — As Egyptians began tallying votes in their presidential runoff election Sunday night, the ruling military council expanded its control over the country yet again, issuing a constitutional amendment to grant itself war powers and raising new questions about what authority the country’s first freely elected president would actually have.

The council’s decision came just as polls closed in the two-day runoff, and after 2 million votes were counted, the candidate of the Muslim Brotherhood, Mohammed Morsi, was in the lead. However, the results were considered preliminary given that Egypt has 50 million eligible voters, and as tallies trickled in throughout the night and into Monday morning there was rampant speculation that the military council would attempt to rig the results in favor of deposed President Hosni Mubarak’s former prime minister, Ahmed Shafik.

(PHOTO: The first box of ballots was counted after the 10 p.m. cutoff at a polling station in the Imbaba neighborhood of Cairo, Egypt on Sunday, June 17, 2012. Egyptians voted in a runoff Saturday and Sunday with a choice between Ahmed Shafik, former prime minister of President Hosni Mubarak, and Muslim Brotherhood candidate Mohammed Morsi. )

What was once celebrated as a revolution that toppled Mubarak and could have inspired the Arab world has increasingly become a counter-revolution by the ruling generals, who have reinstated martial law, dissolved the Muslim Brotherhood-dominated Parliament and will control who writes Egypt’s new constitution.

For the second time in less than a week, the military council issued a decree that greatly enhanced its already near-total power. It amended the temporary constitution to define the powers of the president and gave itself the final say over major military matters. Under the change, president can’t declare war without the military council’s approval, and the council itself will decide its commanders. In the absence of a Parliament, the new president will take the oath of office before the Supreme Constitutional Court, which consists of Mubarak appointees.

Even before the military council’s announcement, the vote was shrouded in suspicion over the generals’ intentions, with many Egyptians convinced that it would ensure a victory for Shafik. The Muslim Brotherhood, which held 47 percent of seats in the now-dissolved Parliament, has increasingly clashed with the generals and on Sunday seemed to signal that it would protest if Shafik was declared the winner.

While final results aren’t expected until Wednesday or Thursday, Egyptians could know the winner by Monday morning, based on tallies of election monitors posted at polling stations around the country. However, the series of moves by the military made it clear that voters had elected a president without knowing what his powers would be.

The Muslim Brotherhood, which initially said it respected the constitutional court’s ruling, has now accused the military of staging a coup.

In the middle-class Cairo neighborhood of Imbaba, as election workers were counting ballots Sunday evening, the military council’s growing powers loomed over the count. The election workers joked about how Egyptians would respond if either one of the two polarizing candidates won. They dumped the piles of ballot in the middle of the table, the sound of ruffling papers filling the room as military officials watched through barbed windows outside.

As Shafik won more votes, one said that the military council “has been building a revolutionary youth prison,” referring to the protesters whose calls for reform led to the vote. “We are all headed there.”

“No we are not,” another responded. “Nobody cares about the state. They only want power.”

An election judge tried to keep them focused: “Count carefully. The difference could be one vote.”

Perhaps the most telling ballots were the ineligible ones. Some wrote in their own names; others did not mark them at all. Another wrote revolutionary favorite Hamdeen Sabahi, who was disqualified in the first round, across both names on the ballot. Still another wrote “O Lord” next to the check for Shafik.

Slowly, the piles of slips of paper in Imbaba grew higher for Shafik. After two hours of counting, the final tally was 1,828 for Shafik and 1,434 for Morsi. Another 120 votes were ineligible. In a second polling station in Alexandria witnessed by McClatchy, Shafik won 1,225 to Morsi’s 1,223. Another 176 were disqualified.

By Sunday night, resignation over the process had turned into sloppiness. In some polling stations workers, soldiers and delegates walked freely through the room. Some representatives of the candidates were put to work as the rules became increasingly more lax.

The new president is to be inaugurated July 1.