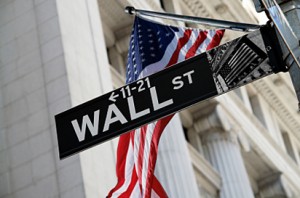 WASHINGTON — Wall Street is betting that the Federal Reserve and other central banks are ready to roll out programs to help protect the global economy from financial market turmoil.

Investors have been piling into the stock market this week on hopes that more stimulus programs might be in the works amid negative U.S. economic snapshots and continued uncertainty in Europe.

The rally was pinned on reports that central banks are preparing stimulus programs in advance of Greek national elections Sunday that could lead to an exit from the eurozone. The Bank of England and British Treasury unveiled plans Thursday to boost liquidity to protect its financial markets.

“Everybody’s talking about Greece,” said Rebecca Rothstein, managing director at Morgan Stanley Smith Barney in Beverly Hills, Calif. “Stabilizing would be a welcome relief to whatever the outcome is.”

Closer to home, the combination of rising jobless claims and easing consumer prices was giving the Fed more reason to spur economic growth by pumping money into the financial system. The central bank’s policy-setting committee meets next week.

Policymakers will be wrangling with the double dose of uninspiring economic data delivered Thursday.

“The Federal Reserve has been quiet about its intentions at next week’s meeting, but inflation hawks will have less ground to stand on, given the recent weakness in consumer prices,” said James Bohnaker, an analyst at Moody’s Analytics.

The Labor Department said new jobless claims rose again last week, marking the fifth increase in the last six weeks. Rising claims for unemployment benefits suggest that layoffs are heading higher, which would be consistent with the spring slowdown in job growth seen in the latest monthly employment reports.

Separately, the department’s Bureau of Labor Statistics reported that the consumer price index dropped a larger-than-expected 0.3 percent in May from the prior month. It was the largest month-over-month decline in this inflation measure since late 2008, and it was driven mostly by a steep 6.8 percent fall in average gasoline prices.

Although falling energy prices are giving consumers some much-needed relief, Mesirow Financial economist Diane Swonk pointed out that there’s a downside to this development.

“We welcome lower prices at the pump,” she said in a note to clients, “but not the reason we have them, which is economic weakness and anxiety about the future.”

Some have argued that there already were reasons enough for the Fed to pull the trigger on another round of bond purchases or some other stimulus action, with the European debt crisis and fiscal and political uncertainties at home weighing on confidence, hiring and consumer spending.

But Fed Chairman Ben S. Bernanke has said the recent deceleration in job growth may reflect the end of “catch-up hiring” by employers who aggressively slashed payrolls because of the 2007-09 recession.

More important, Bernanke also has said additional monetary stimulus might not help the economy very much, given that interest rates already are at historical lows. The Fed has a dual mandate, to control inflation and maximize employment, and Bernanke’s critics and some of his Fed colleagues have expressed concerns that more stimulus could result in runaway inflation in the future.

The Fed’s inflation target is 2 percent. Thursday’s report showed that for all goods and services, the change in the consumer price index fell to 1.7 percent in the 12-month period that ended in May — the lowest rate since early 2011.

“I don’t think there’s a deflation concern as core inflation is still running at 2.3 percent, which will worry some policymakers,” said Chris Williamson, chief economist at Markit, a financial data services company based in London. “For the same reason, today’s data by no means opens the door completely for further Fed stimulus; it’s just nudged it a little more open.”

But analysts expect core inflation to slide steadily lower to the Fed’s target of 2 percent as lower energy and commodity prices and a weaker economy tamp down inflation for used cars and clothes.