Miami builds 17-point lead, then staves off Thunder and evens the NBA Finals 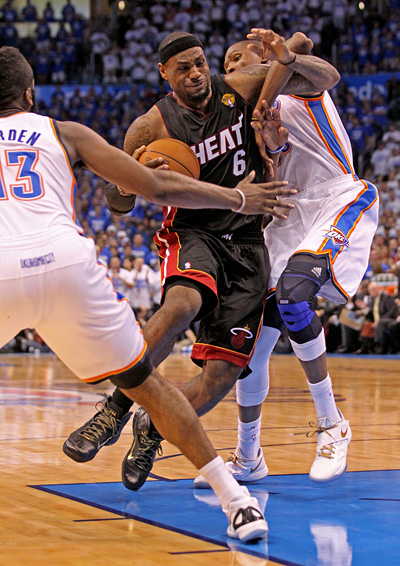 OKLAHOMA CITY — LeBron James and Dwyane Wade had one thing to say as they attacked with abandon and thrust the Miami Heat back into the NBA Finals: NO-KC.

Miami almost lost a 17-point lead but hung on to beat the Oklahoma City Thunder, 100-96, Thursday in Game 2.

(PHOTO: The Oklahoma City Thunder’s Kevin Durant, right, fouls the Miami Heat’s LeBron James in the third quarter in Game 2 of the NBA Finals on Thursday, June 14, 2012, at Chesapeake Energy Arena in Oklahoma City, Oklahoma. The Heat won, 100-96,to even the series, 1-1.)

Was James bigger for the Heat? He had 32 points, including a an off-balance 15-foot bank with 1:26 to play and a successful pair of free throws with 7.1 seconds left, each time giving the Heat just enough room to inhale before another expected charge by the Thunder.

Or was Wade better? He fought through two days’ of questions that pecked at his inaccurate Game 1 and he emerged with 24 points and five assists, no play bigger than his bounce pass while hanging in the air to Chris Bosh for a dunk with 53.8 seconds left.

“Man, it’s fine, whatever,” Wade said of the criticism thrown at him. “I’m not sensitive. I understand the way the world works. But just know that I’m always going to keep coming back until I don’t play this game no more.”

When it was over, the series was tied and the Thunder lost at home for the first time in 10 playoff games at Chesapeake Energy Arena. The next three are in Miami, beginning Sunday with Game 3.

“It meant everything,” said James, who edged slightly closer to his first championship in three tries. “We played too well in the first 36 minutes to let this one slip away from us.”

Wade made 10 of 20 shots after making only seven of 19 in Game 1. He also had six points and five assists Thursday.

Kevin Durant had 32 points for the Thunder but only three rebounds and one assist in almost 39 minutes. A similar hole could be poked in Russell Westbrook’s stats: 27 points but 10-for-26 shooting.

Durant scored strongly after a silent first half, making his first seven shots after halftime, but he missed a seven-footer with 9.9 seconds left that would have tied the score at 98-98. James smacked Durant in the right thigh on the shot but no foul was called.

“I missed the shot, man,” he said after being asked three different times by reporters if there should have been a foul.

Durant picked up his fifth foul with 10:31 to play, going over Udonis Haslem’s back to try to get a rebound. It came after an ill-advised step-back three-point attempt by Westbrook.

Not long after that, Bosh out-hustled four Thunder players for a rebound, a bad omen for Oklahoma City.

Bosh started for the first time since an abdominal strain sidelined him more than a month ago. He had 16 points and tied a career playoff high with 15 rebounds in his fifth game back from the injury.

“I had to really give the effort I’d been giving before, ready or not,” he said.

Oklahoma City blamed nerves for a slow start in Game 1 but the culprit was much easier to target Thursday. The Thunder missed 11 of its first 12 shots.

How bad was the beginning? Miami led, 18-2, until James Harden hit a three-pointer with 4:34 left in the first quarter.

“Oh, man, that was the game,” Durant said, blaming himself for the poor start. “It was just me. I’ve got to make shots for my team.”

Durant had six points on three-for-nine shooting in the first half. He was able to save the Thunder by scoring 17 points in the fourth quarter of Game 1, but couldn’t repeat it Thursday.

“This is going to be probably like this every single game,” Heat Coach Erik Spoelstra said.