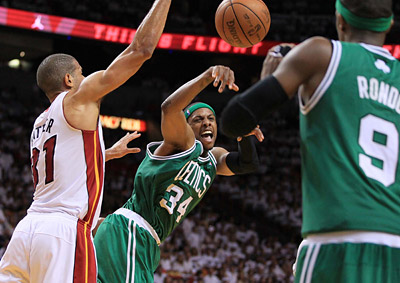 MIAMI — This was more exhale than exultation.

For now, there is the mere satisfaction of traversing the long road back to the NBA Finals.

With the hope for a better result.

(PHOTO: The Boston Celtics’ Paul Pierce (34) makes a pass to teammate Rajon Rondo (9) as the Miami Heat’s Shane Battier (31) defends in Game 7 of the Eastern Conference Finals at AmericanAirlines Arena in Miami, Florida, on Saturday, June 9, 2012. Miami won, 101-88, to advance to the NBA Finals.)

A year after falling two games short of the franchise’s second NBA championship, the Miami Heat will get their shot at redemption, with Saturday night’s compelling 101-88 Game 7 victory at AmericanAirlines Arena finally finishing off the Boston Celtics.

“We wanted to give our fans a big win,” LeBron James said after leading the Heat with 31 points. “We look forward to the next challenge.”

While a modest Eastern Conference championship celebration followed, this has never been about something as mundane, something James, Dwyane Wade and Chris Bosh achieved last season, in their first together as teammates.

This, instead, has, from the moment the NBA lockout ended in December, been about pushing past the sting of last year’s Finals failure against the Dallas Mavericks, with Nowitzki, Terry, Kidd and Cuban exulted on the Heat’s home court and then in the clubs of South Beach.

But Saturday was playoff theater at its finest, with Bosh stepping back to hit 3-pointers, James attacking the basket for 3-point plays, Wade again coming on strong in a second half and the Heat finally surviving.

“That’s what we talk about,” James said. “It has to be a collective group to win the championship. Everybody was in tune today.”

In a game that featured 20 lead changes and 10 ties, with the Heat never up by more than two through the first three quarters, James, Bosh and Wade finally put it away late.

“They’re really talented,” Celtics coach Doc Rivers said. “Erik (Spoelstra) does a terrific job. I wish he got more credit with what he does with that group.”

Wade added 23 point for the Heat and Bosh, who converted a career-high three 3-pointers, contributed 19.

“He was the X-factor,” Rivers said of Bosh. “He gave them exactly what they needed.”

“I just thought we had nothing left,” Rivers said. “That’s how it felt as a coach.”

The second finals of the Heat’s Big Three era comes after challenges far greater than the path taken in 2011. This time there was the revival of the rivalry with the New York Knicks in the first round, the 2-2 uncertainty against the bulkier and bigger Indiana Pacers in the second round, and then this latest test against a Big Three which eventually reached it expiration date.

Instead of the Heat reconsidering its own Big Three as well as the fate of Spoelstra, those questions, at least for now, are put aside in favor of the challenge of the Oklahoma City Thunder, in a best-of-seven NBA Finals series that opens Tuesday at 9 p.m. at Chesapeake Energy Arena.

Rondo, Garnett, Allen and Pierce have now been vanquished by the Heat for a second consecutive season. In their places comes the challenges of Durant, Westbrook, Harden and Ibaka.

Unlike last season’s NBA Finals, this quest for the franchise’s second championship will begin on the road, in a series to be played in the Finals-only 2-3-2 format, with the Heat’s home games to commence next Sunday, with Tuesday and Thursday games to follow AmericanAirlines Arena.

Tickets for the Heat’s first two home dates in the Finals, Games 3 and 4, go on sale Sunday at all Heat ticket outlets other than AmericanAirlines Arena.

Saturday, homecourt advantage again came through, with NBA teams now 89-22 at home in Game 7s. The victory lifted the Heat to 8-2 at home this postseason, and prevented the Celtics from becoming the only team to win three times this season on the Heat’s floor.

The fourth quarter was riveting, with Bosh and Allen matching 3-pointers early, James attacking and Garnett posting up.

It came down to a possession-by-possession slugfest.

When Bosh hit his third 3-pointer of the night, the most he has made in any game regular season or postseason, with 7:17 to play, it put the Heat up 86-82, the heat’s largest lead of the night to that point.

James followed with a driving layup for an 88-82 Heat lead.

But that’s when James, with the shot clock expiring, hit a 30-foot 3-pointer for a 91-84 Heat lead, effectively ending it.

Down 53-46 at the start of the third quarter, the Heat used an 8-0 to push to a 59-59 tie with 7:12 to play in the third period on a 20-foot jumper from Wade. Along the way, Heat forward Shane Battier hit his fourth 3-pointer of the night, closing with a series-high 12 points.

Four turnovers early in the third period were costly for the Celtics.

It was tied 73-73 entering the fourth quarter.

It was the third Game 7 over the last 15 years to be tied entering the fourth quarter.