Devils just got closer to the Kings 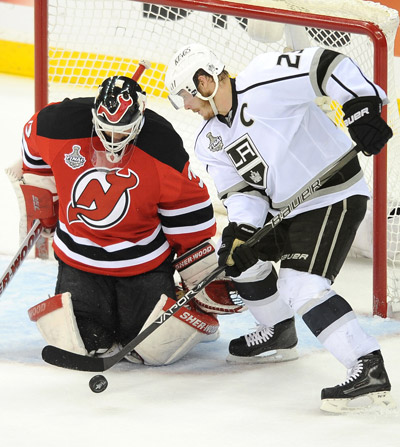 NEWARK, N.J. — If the Devils didn’t believe before, they should now.

They’re halfway to a historical comeback after a 2-1 victory over the Los Angeles Kings in Game 5 of the Stanley Cup Finals on Saturday night at Prudential Center.

Defenseman Bryce Salvador’s unexpected offensive magic continued as he was credited with the go-ahead goal 9:05 into the second period and goaltender Martin Brodeur made 25 saves as the Devils pushed the series back to Los Angeles for a Game 6 on Monday night.

“We’re back in this thing now,” said Devils captain Zach Parise, who scored his first goal of the series and stood out with his effort throughout.

The Devils are bidding to end the 70-year drought since the 1942 Toronto Maple Leafs became the only team in NHL history to come back from a 3-0 Finals deficit to win the Stanley Cup. By getting to a Game 6, the Devils have done what only two teams in league history accomplished. The 1945 Detroit Red Wings are the only other team to get to a Game 6 after losing the first three games of the Finals. They got to a Game 7 against Toronto before falling, 2-1.

“We could have packed it in two games ago, but you see we have a bunch of resilient guys that want to try to make history and try to win the Stanley Cup,” Brodeur said. “We’re not going to give up. Not travel or anything is going to change the attitude of the guys.”

The Devils ended the Kings’ road perfection by handing them their first loss in 11 games outside Staples Center this postseason. They must be wondering what they have to do to finish off the Devils, who just won’t go away.

Their frustration appeared to bubble over in some after-the-whistle scrums in the third period.

“That’s how we want to get this series and it seems to be going that way right now,” Devils defenseman Henrik Tallinder said. “They have all the pressure now going back home to their building. They probably don’t want to come back to Newark and play. It’s pretty tough to play here.”

The Kings outshot the Devils, 9-3, in the third period, but couldn’t put the tying goal past Brodeur, who was a solid, calming presence again.

“His performance speaks for itself,” Devils coach Pete DeBoer said of Brodeur. “It’s the timing of it. I think the fact we’re 10-1 in Games 4 through 7 in a series is a testament to how he enjoys that type of pressure.”

Brodeur, 40, seems to be cherishing this opportunity to spoil the Kings’ plans to be celebrating a championship by now.

“It’s a matter of us now going into a tough environment in L.A. to try and ruin the party again,” Brodeur said. “They’re so close to winning the Stanley Cup that I’m sure it’s getting to them a little bit to be able to have all these chances and not capitalize on them.”

The Devils are still in this series because they capitalized on some fortunate bounces Saturday. A mistake by Kings goaltender Jonathan Quick helped the Devils grab the lead on Parise’s power-play goal at 12:45.

Quick came out to play the puck to the right of his net and tried to fire it off the boards behind the net and out the other side, but his aim was off and the puck bounced off the end boards and hit the back of the net instead. Parise raced in to collect it and stuff it inside the right post before Quick could get his left pad over.

Justin Williams pulled the Kings even 3:26 into the second period. Williams took a pass from Matt Greene, cruised into the slot alone and ripped a wrist shot over Brodeur’s blocker for his fourth goal of the playoffs.

Brodeur kept it a 1-1 game with a stacked-pads save on Jarret Stoll on a breakaway at 4:53. At the other end, Quick stretched out his right pad to stop Travis Zajac’s backhand in front at 5:09.

The Devils retook the lead at 9:05 when Salvador threw a puck on net from the left point that deflected off Kings defenseman Slava Voynov in front and floated inside the right post.