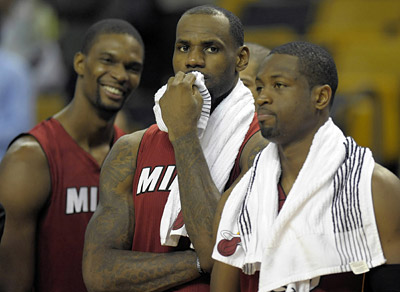 And so now, it comes to this.

One game for the Heat to keep alive its hopes of hoisting a championship trophy in late June.

One game to continue shaping its legacies.

One game to help validate this Big 3 blueprint.

There is nothing more exhilarating and excruciating in sports.

“That,” Udonis Haslem said, “is what you dream about. It will be the toughest battle we’ve had all playoffs.”

LeBron James lifted his team, and this city, on his shoulders Thursday night, delivering numbers (45 points, 15 rebounds, five assists) achieved by only one other player in postseason history: Wilt Chamberlain.

But can he deliver another magnificent, mesmerizing performance against Boston on Saturday, this time on his home court?

“I don’t know,” he said. “I’ll continue to play at a high level, like I’ve done the whole postseason… . I will not regret Game 7. I will go in with the mind-set I’ve had the whole season.”

James has averaged more points in elimination games (31.4) than any player in NBA history — one-tenth of a point more than Michael Jordan. James is 3-6 in elimination games — Jordan was 6-7 — but James will be buttressed Saturday by a supporting cast stronger than any he had in Cleveland.

“He’s committed to do whatever it takes, and it might be another effort like that,” Heat coach Erik Spoelstra said Friday. “It might not be needed to be that great. Whatever he is asked, he’ll do. He’s a brilliant basketball player.”

The Celtics have directed more of their double-teams at Dwyane Wade than James in this series. Asked Friday if the Celtics will change their defensive approach on James, Boston coach Doc Rivers said, “We’re not going to do much. We have to do what we’re supposed to do better first. If we have to make changes, we will.”

The problem is that James can inflict damage in many different ways. “It’s a joy to watch,” Wade said.

James excelled in isolations Thursday, shooting 8 for 14 and scoring 20 points after producing just 24 points on 9-for-30 shooting on isolations in the first five games.

He converted all four of his shots in the basket area.

And James made all seven of his shots on post-ups and drew a foul another time. James, who was fourth in the league in points per possession on post-ups this season, was 6 for 16 posting up in the first five games.

“I was aggressive from the opening tip,” James said. “It’s a great feeling, when you feel like everything you’re putting up is going in.”

“You all see that look he had on his face?” Mario Chalmers said. “He had that look on his face since (Wednesday night) at dinner. We knew he was going to come out ready to play. That’s why he’s the MVP. I call it his ugly look.”

The other two pieces of the Big 3 contributed in different ways Thursday. But more will be expected Saturday, especially in Wade’s case after a 6-for-17 shooting night and another subpar first half (1 for 6).

With Chris Bosh, the numbers were modest (seven points, six rebounds in 28 minutes), but his impact was not.

Consider that Miami shot 53.3 percent (24 for 45) with Bosh in the game and 41.9 percent (13 for 31) with Bosh on the bench. Kevin Garnett is unlikely to leave Bosh unguarded on the perimeter — as he would, say, Joel Anthony — to offer help on James or Wade. The upside is easier, less-contested shots for others.

“We’re a different team when Chris is on the court,” Spoelstra said. “You have to guard him. Great shooter from outside, great passer. We’ve said for two years he’s our most important player. He’s the guy that makes it all work.”

Spoelstra used two natural power-rotation players in tandem for less than eight minutes in Games 1 through 5. But he paired Bosh and Haslem together for 12 minutes in Game 6, and the Heat outscored the Celtics 35-19 during that time.

A case could be made to start Bosh and Haslem together in Game 7 — the Heat started the playoffs 5-1 with that lineup before Bosh’s injury — but Spoelstra might stick with Shane Battier and bring Bosh off the bench.

Spoelstra was typically noncommittal about that Friday.

For all of Wade’s offensive struggles in the first halves in this series, he put his imprint on Game 6 with eight rebounds, four assists, three steals and sturdy defense on Rajon Rondo. Unlike in past games, the Heat opened with Wade guarding Rondo and Chalmers on Ray Allen.

Rondo shot 2 for 7 and scored six points with Wade guarding him and went 6 for 7 against everybody else.

Even so, Wade must be more efficient offensively Saturday.

“Certain shots hopefully I’ll make that I missed (in Game 6),” he said. “If not, I’ll still make an impact on the game. I’m not a one-dimensional player.”

Said Spoelstra: “I don’t think this group gets too high, too low, too jittery. If anything, the big lights, the moments like this are the ones these guys froth at the mouth for.”