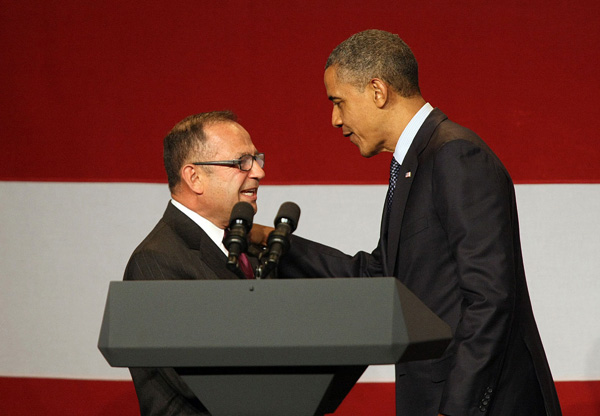 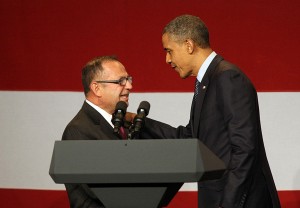 LOS ANGELES — At a gay-rights dinner last year in New York City, when President Barack Obama ticked off the list of gay-friendly policies he had enacted, hecklers shouted, “Marriage!”

At a similar event Wednesday night in Beverly Hills, nearly a month after the president embraced gay marriage, there was no heckling. Instead, 600 supporters at the LGBT Leadership Council event rose to their feet as one, chanting, “Four more years!”

L.A.’s gay community turned out in force to celebrate the man who has been dubbed the nation’s “first gay president.”

The event at the Beverly Wilshire Hotel was part of a two-day fundraising swing through California and Nevada during which Obama was expected to raise more than $15 million for his re-election effort. He started the day in San Francisco and ended with a $25,000-per-person dinner for 70 at the Beverly Hills home of Ryan Murphy, creator of the TV show “Glee.”

Comedian Ellen DeGeneres, whose decision to come out of the closet in 1997 was covered as a major cultural — and potentially career-ending — event, emceed the party. Darren Criss, a heartthrob on “Glee,” provided entertainment, after the singer Pink withdrew, citing illness.

The gathering was a who’s who of gay Hollywood, and included many of the creative minds whose portrayals of gays on screens large and small has nudged society toward accepting gay rights. Max Mutchnik, creator of “Will and Grace,” was a co-host. Dustin Lance Black, Oscar-winning screenwriter of “Milk,” was in the audience, as were Cher and her son, Chaz Bono.

The president, who spoke for 30 minutes, was relaxed as he ticked off his administration’s gay-friendly accomplishments, including the repeal of the military’s “don’t ask, don’t tell” rule. He didn’t mention gay marriage. He didn’t have to.

Recent strides in gay rights, he said, were simply part of the country’s history of civil rights struggles, of “this constant progression to include more and more people in the possibility of the America dream.”

“And so this is just one more step in that journey that we’ve take as a nation. And it doesn’t always go in a straight line, it goes in zigs and zags. There are times when the body politic takes a wrong turn and there are times where there are folks who are left out. But what makes America exceptional is eventually we get it right, what Dr. King called the arc of the moral universe — it bends toward justice.”

Every so often, he said, he looks at “a little checklist in my desk in the Oval Office — my ‘to do’ list.”

With a hearty “Check!” after mentioning each item, he cited the Lilly Ledbetter Fair Pay Act, ending the Iraq war, defeating Osama bin Laden and ensuring health care access for 30 million who were uninsured.

But he acknowledged persistent problems with the economy and joblessness, issues that make Americans anxious. That anxiousness, he said, will be easy for Republicans to exploit as the election nears.

“It’s very easy to put on a bumper sticker: ‘It’s Obama’s fault,’ ” he said. “We’re going to have to work through that.”

Obama is scheduled to hit a new money-chase milestone on this trip: his 150th fundraiser. The 150 events have taken place since he filed as a candidate for re-election in April 2011, according to a tally by CBS News. Funds raised at these events support the Obama campaign as well as the Democratic National Committee and several state Democratic parties.

Republicans pounced on the pace of his fundraising.

“Instead of taking action to create jobs, the president has decided to focus on holding a record 150 fundraisers to save his own — it must be tough being president when there are so many parties to attend,” said Republican National Committee spokesman Matt Connelly.

Before the event began, a long line of partygoers waited on the sidewalk outside the hotel to check in. CBS chief Les Moonves and his wife, Julie Chen, waited patiently for their wristbands. Obama, Moonves said, “has shown great leadership” on the issue of gay marriage.

Though he heads a news division, Moonves said, “ultimately journalism has changed … partisanship is very much a part of journalism now.”

He hastened to add that despite his presence, “I run a news division. I’ve given no money to any candidate.”