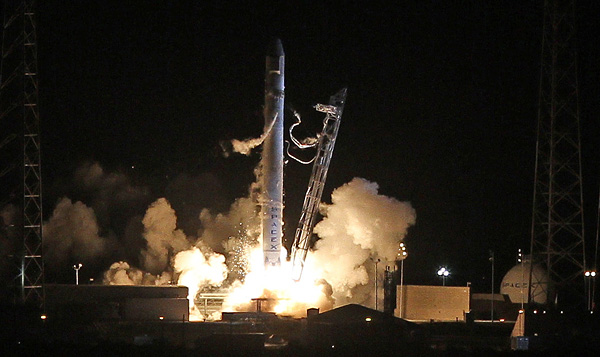 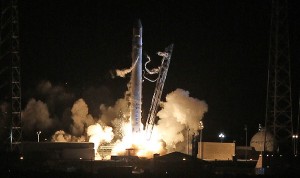 By Scott Powers, The Orlando Sentinel –

CAPE CANAVERAL, Fla. — The SpaceX Dragon capsule is on its way to a rendezvous with the International Space Station and possibly heralding a new era of space transportation.

(PHOTO: A Falcon 9 rocket carrying the Dragon spacecraft blasts off, Tuesday, May 22, 2012, from Complex 40 at Cape Canaveral Air Force Station. SpaceX is the first private company to build a rocket for a mission to the International Space Station.)

At 3:44 a.m. EDT Tuesday, SpaceX’s Falcon 9 rocket blasted off at last from Cape Canaveral Air Force Station. And just under 10 minutes later SpaceX officials gathered at NASA Mission Control in Houston erupted into applause as the company’s Dragon capsule separated from the rocket and went into orbit, headed for its historic planned rendezvous with the International Space Station.

On Thursday the Dragon should reach the station, orbiting the Earth at 17,000 mph. If a series of test maneuvers are successful, on Friday it would dock with the station and deliver a half ton of supplies.

With this launch, SpaceX opens the era in which private companies could offer the rides NASA needs to ferry supplies and eventually astronauts to and from the space station. It also furthers the ambitions of other government agencies and private companies around the world that want to run their own operations in space.

At a post-launch press conference, SpaceX founder and CEO Elon Musk compared the moment with the time in the 1990s when commercial interests took over development of the Internet, and dramatically accelerated the pace of development and made it accessible to mass markets.

“I hope and I believe this mission will be historic in marking that turning point towards a rapid advancement in space transportation technology,” said Musk, a South African-born entrepreneur who became a billionaire through helping found the Internet service PayPal, then started a space business in 2002.

The SpaceX mission also a critical test of the Obama administration’s decision to rely on commercial spacecraft to supply the space station. NASA now is booking almost all of its space station cargo shipments aboard private spacecraft operated by SpaceX and a competitor developing its own rockets, Orbital Sciences.

And in this election year, NASA Administrator Charles Bolden came to Kennedy Space Center to push the president’s private-competition space programs and hold up SpaceX success as a jobs generator.

“Today marks the beginning of a new era in exploration, a future in space that will create good-paying jobs here on the Florida coast as well as throughout the United States of America,” Bolden said after the launch.

NASA and SpaceX both insist this is nothing more than a test flight.

Yet it also is a cargo mission; the Dragon is carrying 1,014 pounds of food, clothing, batteries and a couple of science experiment kits to the station. If successful, SpaceX will be the first private company to deliver goods to the space station.

The prize is the $1.5 billion, five-year contract NASA has with SpaceX to provide 12 cargo flights over the next several years.

SpaceX President Gwynne Shotwell said SpaceX has spent about $1.2 billion so far, including $390 million in grants from NASA, to get to this point.

Several other companies including Orbital, Boeing, Blue Origin and Sierra Nevada Corp. are planning to join them either to carry cargo or astronauts or both. Orbital plans its maiden launch of its Antares rocket and Cygnus space capsule later this year.

Until now, only NASA and the Japanese, European and Russian space agencies have docked with the space station. Since NASA retired its space shuttle fleet last summer, only the Russians are able to deliver astronauts. Gerstenmaier said NASA has no more contracts for the Russians to truck cargo to the space station, and it is turning over everything possible to the commercial companies.

Within minutes of the launch, the Commercial Spaceflight Federation extended its congratulations to SpaceX in a written statement.

“This is a testament to the viability of the commercial spaceflight industry,” said CSF Chairman Eric Anderson.

Added Mark Sirangelo, chairman of Sierra Nevada Corporation Space Systems, “The Shuttle may be retired, but the American dream of space exploration is alive and well.”

The launch originally was set for last Saturday but was scrubbed literally during the last second due to a stuck engine valve, and rescheduled for Tuesday. NASA and SpaceX decided to hold to the original May 31 end-of-mission date. If all goes well, Dragon will splash down in the Pacific Ocean that day, and SpaceX will retrieve it.

The prospect of SpaceX carrying astronauts is at least three years away.

Before then, SpaceX is planning two more cargo launches this year and up to 17 in the next three or four years, serving both NASA and other customers, including private satellite companies and agencies in Canada, Thailand and Argentina. Almost all of those launches are planned from Cape Canaveral, though some will leave Vandenberg Air Force Base in California.