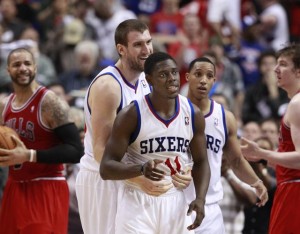 Joakim Noah badly sprained his left ankle midway through the third quarter, inexplicably returned to hit a fourth-quarter jumper while hobbling badly and then sat again. C.J. Watson, who failed to score, merely has a broken jumper.

And the Bulls, who blew a 14-point, fourth-quarter lead, collectively are reeling badly after dropping two straight games for just the fourth time in 15 months.

The 76ers’ tough and gritty 79-74 victory pushed them ahead 2-1 in the best-of-seven Eastern Conference quarterfinals that resume here Sunday. So much for being that No. 1 powerhouse seed the Bulls were when they entered the playoffs.

“We played with a great edge all season long,” Thibodeau said. “When you’re down people, you have to play hard and with an edge. We have to get back to that. You have to claw, scratch, fight, whatever is necessary. That has been a staple all season, more so now than ever. That’s how we have to play.”

Noah gruesomely turned his left ankle as he led a fast break and stepped on Andre Iguodala’s foot with 7 minutes, 57 seconds left in the third. Hobbling badly, he purposely fouled Evan Turner at the 6:46 mark so he could exit straight to the locker room.

But Noah returned early in the fourth, even though he barely could run. Still, he gamely made a jumper with 9:34 left in the fourth to push the Bulls ahead 69-56.

That’s when the wheels fell off.

The Bulls failed to score on 12 of their next 13 possessions, scoring two points in just less than nine minutes of a 18-2 76ers’ run. John Lucas III’s 3-pointer with 43.1 seconds left stopped the bleeding, pulling the Bulls within 75-74.

But Omer Asik fouled Turner with 20.1 seconds left on Turner’s second effort, and he buried both free throws. Out of a timeout, Deng, who scored five points on 2-for-7 shooting, badly missed a 3-pointer.

Jrue Holiday then sealed matters with two free throws with 13 seconds left. The Bulls shot 6-for-25 in the fourth quarter and scored 14 points.

For a coach who repeatedly said the Bulls don’t have to change in the wake of Rose’s season-ending injury, Thibodeau sure changed a lot.

He rode his starters longer than usual to open the game and heavy minutes overall. He benched Ronnie Brewer and dusted off seldom-used rookie Jimmy Butler to try to slow Turner. Thibodeau even — and we hope you’re sitting down — laughed and smiled during a third-quarter timeout.

By game’s end, there were only long faces in the Bulls’ locker room. When a home team has won Game 3 of a best-of-seven series that is tied 1-1, that team has won 70 percent of those series.

The Bulls, who were a league-best 24-9 on the road during the regular season, face a must-win situation Sunday.

“We’ve been a tough road team all season,” Thibodeau said. “I think we understand what it takes to win on the road.”

Spencer Hawes led the 76ers with 21 points, including 10 in the fourth quarter.

Carlos Boozer’s 18 points topped the Bulls and he added 10 rebounds. Richard Hamilton, seeing fourth-quarter action for the first time this series, added 17 but missed 11 of 15 shots.

“I think we can mix up a lot of different things,” Boozer said. “We have a huge, huge playbook. The details of it are we have to bring our energy and intensity, get back to playing with an edge.”