In Pakistan, Hafiz Saeed protests $10 million US bounty for his capture 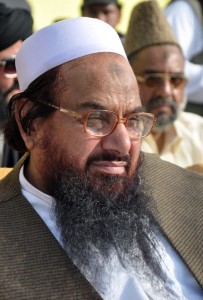 LAHORE, Pakistan — Hafiz Mohammad Saeed, the Pakistani Islamist leader on whom the United States placed a $10 million bounty earlier this month, filed a court challenge Wednesday demanding that the Pakistani government provide him security and pressure Washington to lift the reward for his capture.

(PHOTO: Pakistani Islamist leader Hafiz Saeed on Wednesday, April 18, 2012, filed a court challenge to the $10 million bounty placed on his head recently by the United States. Saeed’s petition seeks to force the Pakistani government to provide him security and get the U.S. to remove the bounty.)

Washington accuses Saeed, a free man in Pakistan who travels openly around the country, of founding the banned extremist group Lashkar-e-Taiba and of maintaining links to al-Qaida.

His case highlights the contradictions in Pakistan’s anti-terrorism policy, under which Islamabad tolerates or even supports some jihadist organizations while cracking down on others. Lashkar-e-Taiba, though nominally banned in Pakistan in 2002, is reputedly close to the country’s powerful military establishment.

Saeed continues to live at his house in Lahore, Pakistan’s second largest city and the capital of the eastern province of Punjab . He’s a major force behind a new Islamist coalition, the Defense of Pakistan Council, that’s holding rallies around the country with a fiercely anti-American agenda.

After the announcement of the U.S. bounty, Saeed ridiculed it, saying at a news conference, “Here I am in front of everyone, not hiding in a cave.”

In a constitutional petition filed Wednesday before the Lahore High Court, an attorney for Saeed and his brother-in-law, Hafiz Abdul Rehman Makki, on whom the United States simultaneously placed a $2 million bounty, told the court that the men feared being handed over to U.S. authorities by the Pakistani government. They also asked for the Punjab government to provide them with security protection.

The court directed Punjab to respond to the petition at a hearing scheduled for next week.

In an interview with McClatchy Newspapers, the lawyer, A.K. Dogar, said: “Hafiz Saeed has protection under the constitution of Pakistan. We are asking our government to make the Americans realize that what they announced is unconstitutional.

“We could not announce head money against an American sitting in America. No state is allowed, under international law, to interfere in the affairs of another state.”

The United States offered $10 million “for information leading to the arrest or conviction” of Saeed, 61, under the Rewards for Justice Program, accusing him of helping to plan the 2008 terrorist attack on the Indian commercial capital of Mumbai, which left 166 people dead, including six U.S. citizens. The 10 gunmen, who sailed from Pakistan to Mumbai and then went on a four-day killing spree, are alleged to have belonged to Lashkar-e-Taiba. According to the Indian authorities, the sole surviving gunman, Ajmal Kasab, who was captured, confessed to having met Saeed during their training.

So far, the Pakistani government has lept to Saeed’s defense, with Prime Minister Yousuf Raza Gilani describing the case as an “internal issue” and adding that “if there is any concrete proof against Saeed then it should be provided to Pakistan, which has an independent judiciary.”

Immediately after the Mumbai attack, Pakistan imprisoned Saeed for six months but the courts ordered him to be released after the government wasn’t able to produce significant evidence against him. At the time, Islamabad had claimed publicly to have outlawed Jamaat-ud-Dawa and Saeed also could have been convicted for leading it, but the government’s lawyers were unable to provide the courts with any written order banning the group.

It’s unclear whether the U.S. has any new evidence against Saeed.