Waterloo goes ahead with “Sportsplex” as Mason City struggles for answers

Mason City is not the only community in the region looking at building a city-run recreation center.

The Waterloo-Cedar Falls Courier is reporting that the Waterloo City Council OK’d plans Monday to go ahead with building a “Cedar Valley Sportsplex.”

While not exactly the same as Mason City’s “multi-purpose arena,” which would include up to two sheets of ice for hockey and ice skating as well as provide a venue for concerts, pro-wrestling and other possibilities, Waterloo’s project would cost about the same ($20 million) and both cities would be in the business of running the day-to-day operations.

Mason City leaders now call the multi-purpose arena project a “Sports and Entertainment Center” and are considering paying for a feasibility study on the project.

According to a website dedicated to the Waterloo project, “The Cedar Valley Sportsplex will provide fitness opportunities for all children and adults in a central  location for the citizens of Waterloo and the Cedar Valley. Located near the Young Arena and the Waterloo Center for the Arts, the complex creates an activity zone within the downtown area.  The project is sited on two city blocks and will feature a large turf field house for soccer and baseball.  Other program spaces include a two court gymnasium space, locker facilities, multi-purpose meeting space, child care, kid’s gym and offices for Waterloo Leisure Services Divison on the main level. Upper level spaces include members lockers, fitness studious, golf practice, weights and cardio workout area and a four lane running track. A leisure pool will be completed in Phase 2.”   (See artist rendering from same source, above.)

The site says groundbreaking will begin April 19th in Waterloo.

The project will use TIF (tax increment financing) and GO bonds to finance the construction, (even as the Iowa Legislature works on TIF reform) similar to tools Mason City would use to fund its project.

The Courier reported that Waterloo Mayor Buck Clark said he was “quite confident” the SportsPlex will operate in the black… a similar concern Mason City leaders are grappling with at this time. 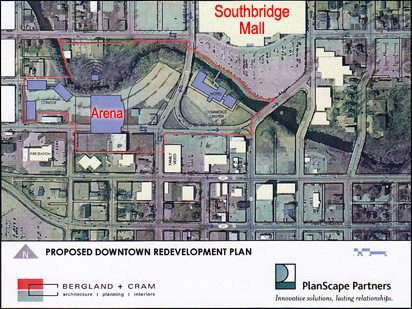