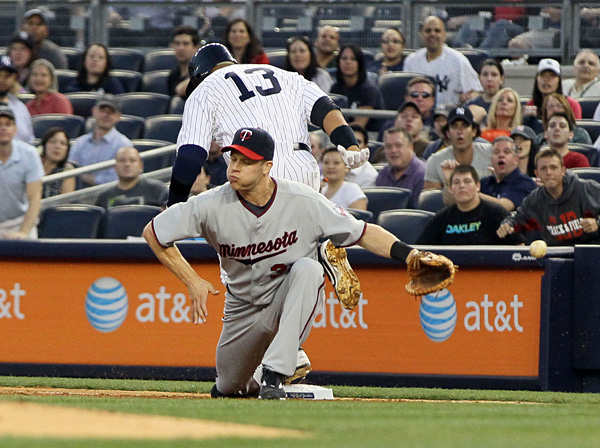 NEW YORK — Minnesota Twins manager Ron Gardenhire broke up the M&M boys on Monday. He didn’t bring flowers or candy. He didn’t do it in a public place to keep them from making a scene.

(PHOTO: Alex Rodriguez of the New York Yankees runs out a first inning infield single as Justin Morneau of the Minnesota Twins can’t handle the throw at Yankee Stadium on Monday, April 16, 2012 in New York.)

But they had to be separated, for the good of the Twins lineup.

Joe Mauer batted in his customary No. 3 spot in the order as the Twins began a four-game series in the Bronx. Justin Morneau, however, was moved to the No. 5 spot as Josh Willingham, the American League player of the week, batted cleanup.

And they separately did against the New York Yankees, leading the Twins to a 7-3 victory to get a road trip off to a good start.

Righthander Carl Pavano used every edge of the strike zone given to him by home plate umpire Gerry Davis to pitch seven innings in a city where he was once derided as a player. Yankees fans booed him lustily as he walked in from the bullpen before the first pitch.

The new heart of the order gave Pavano a 2-0 lead in the first as Mauer doubled, Willingham singled him home, Morneau singled and Ryan Doumit followed with a single. Pavano gave it right back, as Derek Jeter and Curtis Granderson opened their half of the first with back-to-back homers.

Pavano figured out a way to last seven innings, looking as if he was inventing pitches as he went along and giving up only three hits the rest of the way.

Meanwhile, Mauer and Morneau went to work. It was the first time Morneau hasn’t followed Mauer in the batting order since April 4, 2008, when Mauer batted second against the Kansas City Royals with Morneau fourth.

After Jamey Carroll tied the score with a two-out RBI single in the fifth inning, Mauer’s RBI double scored Carroll to give the Twins a 4-3 lead. Morneau destroyed Freddy Garcia’s opening pitch of the sixth for a solo home run that landed in the back of the Yankees bullpen. The Twins added two more runs in the eighth as they built a four-run lead.

By the end of the night, Mauer had two doubles and a single. giving him 1,107 hits for his career and moving him into 10th place on the Twins all-time list. Morneau is 19-for-42 in his career at the new Yankee Stadium with five homers and five doubles.

Keep in mind that Morneau hasn’t played in the postseason since 2006 because of injuries. A lineup featuring both Mauer and Morneau might have given the Twins a better chance in the 2009 and ’10 playoffs against New York.

Morneau’s big game came during his first appearance of the season at first base. After announcing during spring training that he would play mostly at designated hitter this season, Morneau decided it was time to give playing in the field a try.

He was fine with moving down in the order, too.

“Oh, he said it was about breaking up the lefties; it makes the (opponent) make a decision with relievers,’’ Morneau said. “He didn’t say anything about it, but I’m sure it has something to do with how good Willingham’s swinging the bat, too. Joe hasn’t really been getting a lot to it, so for now it make sense. It doesn’t matter to me; as long as I’m in the lineup and whatever gives us the best chance to win.”