Zimmerman is jailed on second-degree murder in Trayvon Martin shooting 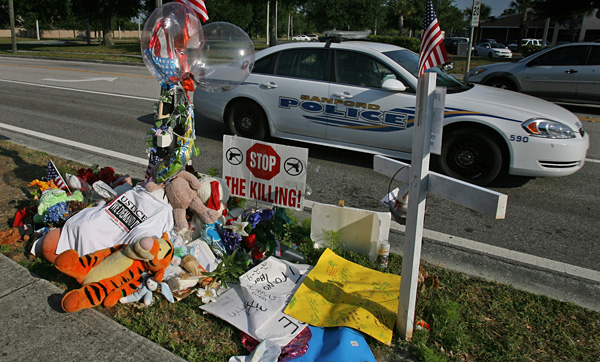 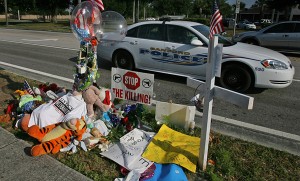 By Jeff Weiner and Rene Stutzman, The Orlando Sentinel –

ORLANDO, Fla. — On a rainy night in February, George Zimmerman fired a single shot, killing 17-year-old Trayvon Martin and sparking an international outcry. Thursday, he will face a judge, accused of the teenager’s murder.

(PHOTO: A Sanford police car passes by a makeshift memorial Wednesday, April 11, 2012 that has been erected for Trayvon Martin, the teen that was shot and killed by George Zimmerman, a neighborhood watch person.)

Late Wednesday night, Zimmerman — his head covered — was ushered out of a black SUV and into the Seminole County Jail, just hours after special prosecutor Angela Corey announced a second-degree murder charge against him.

Zimmerman, if convicted as charged, could face a life sentence in prison.

His new lawyer, Mark O’Mara, said his client would make his first appearance in Seminole County court on Thursday.

“I can tell you we did not come to this decision lightly,” Corey announced at a news conference at her Jacksonville office. “Let me emphasize that we do not prosecute by pressure or petition. We prosecute cases based on the relevant facts of each case and on the laws of the state of Florida.”

She would not discuss any of the evidence: not whose voice was heard crying for help in the background of a 911 call. Not the facts that prompted her to choose second-degree murder over manslaughter.

She also would not criticize Sanford police — who had refused to arrest Zimmerman and insisted they had no solid evidence that he did anything but defend himself, as he has claimed.

Zimmerman, she said, was ordered held without bond, like other second-degree-murder suspects in Seminole County. He surrendered to the Florida Department of Law Enforcement in Jacksonville once he found out there was a warrant for his arrest.

“The team here with me has worked tirelessly looking for answers in Trayvon Martin’s death,” Corey said. “We will continue to seek the truth in this case.”

At the Washington convention center where Martin’s parents later spoke, a crowd of about 40 had gathered around a hallway TV to hear the decision by the special prosecutor. When she said they would pursue second-degree murder, many in the group erupted in applause.

“We don’t want anyone high-fiving tonight. There was no winner tonight,” Sharpton said. “This is not about gloating. This is about pursuing justice.”

With a shaky voice, Martin’s mother, Sybrina Fulton, thanked God for the charge and said she wanted “nothing more or nothing less” than an arrest. His father, Tracy Martin, noted that this is just the beginning.

That process begins Thursday, before a circuit judge in Seminole County court. Where it goes from here — and for how long — will remain in question until the legal process plays out.

“Every case is different, obviously,” said defense attorney Patricia Cashman. After the first appearance, a bond hearing will likely follow, then an arraignment and then the discovery process, in which much of the evidence in the case will become public.

For comparison, by the time Central Florida’s last nationally infamous defendant, Casey Anthony, went to trial in May, the charges against her were more than 2 years old. Anthony faced a first-degree-murder charge, however. Zimmerman is charged with second-degree murder.

“A second-degree charge is generally thought of as a heat-of-passion thing,” said Cashman, as opposed to a premeditated killing. Often, it’s the result of “an argument that ends in a death.”

Sanford police investigators had initially classified the case as a possible manslaughter, which is a lesser offense. The charges are similar in that they don’t require a premeditated act.

However, under Florida law, a manslaughter charge requires only “culpable negligence” on the defendant’s behalf. Second-degree murder, the law says, results from “an act imminently dangerous to another and evincing a depraved mind regardless of human life.”

Zimmerman’s arrest has been demanded for weeks, by people in cities across the nation and around the world. It follows weeks of marches, rallies, protests and sermons.

Though the Trayvon Martin case has become a phenomenon, it began as a shooting Feb. 26 in a Sanford gated community, overshadowed by the bright lights and celebrities of the All-Star Game that was taking place nearby in Orlando.

Zimmerman, a former altar boy whose dream was to become a police officer, was in his SUV on his way to a Target store when he spotted Martin, a high-school junior, in the Retreat at Twin Lakes, a gated Sanford community.

The teen from Miami had been returning from a nearby 7-Eleven, where he bought a can of iced tea and a bag of Skittles, when he was spotted by Zimmerman, who called police to report Martin as suspicious.

In a series of 911 calls shortly after, neighbors described an altercation between Zimmerman and Martin. On one call, screams can be heard, and then a gunshot. Martin’s lawyers said the screams are from the teen; Zimmerman’s father said it is his son shouting for help.

Martin’s death has reignited racial tensions across the country and sent protesters to the streets in numbers seldom seen since the anti-war movement of the 1970s.

The outcry prompted the U.S. Department of Justice to launch a civil-rights investigation, the governor to put the case in the hands of a special prosecutor and Sanford’s police chief to temporarily step aside.

Civil rights leaders — including the Rev. Jesse Jackson — members of Congress and celebrities descended on Central Florida and called for Zimmerman’s arrest. Sharpton, one of the sharpest critics, warned that the quaint lakeside city of 53,000 was on the verge of becoming known as the Birmingham or Selma of the 21st century.

More than 2 million people signed an online petition, urging Zimmerman’s arrest. During the long interval between the shooting and his arrest, he remained silent and out of sight.

On Wednesday, Zimmerman got a new lawyer, replacing attorneys Craig Sonner and Hal Uhrig, who publicly withdrew from the case the day before, saying they hadn’t been able to get in touch with Zimmerman for two days.

His new attorney, O’Mara, is a veteran Orlando defense lawyer. He said he’ll ask a judge to grant bail for his new client so Zimmerman can assist with his defense.

“He needs to be safe, but he doesn’t need to be in a jail to be safe,” O’Mara said. “He just has to be left alone and let the process work.”